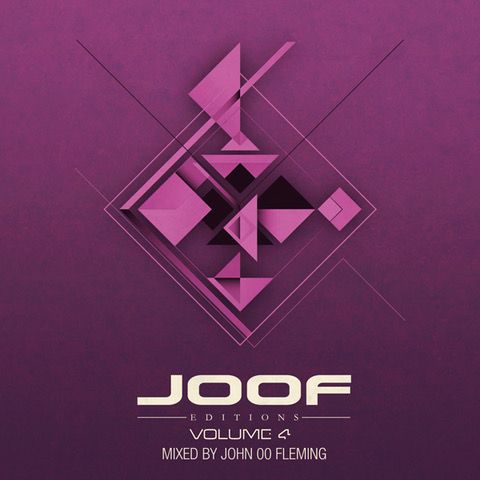 To truly push the envelope, logic dictates you must first bin its respective rulebook. In conceiving his JOOF Editions series, that’s what John 00 Fleming did with mixcomp’s rubric. He imagined a higher, more reflective calling for the medium, taking it beyond that of mere DJs’ ‘calling card’. A means to an end, ‘Editions’ convention-busting 4-hour + runtimes provide a 1-for-1, real-time mirroring of the XL 00 Fleming experience.

That though is now four-year-old history. In the intervening years, ‘JOOF Editions’ have become John’s established ‘norm’ – the only way he does compilation business. On cue, this March sees him deliver its fourth voluminous volume.

Heightened mixcomp orders naturally call for ever more exacting measures, and ‘in JOOF Editions 4’s assembly, John has once again been unwavering in the collative pursuit. In the quest for its audio, no studio stone has gone unturned – a trek that has taken him to the doors of producers ranged from the legendary to the neophyte.

At its outset, ‘Editions 4’s style-band is locked into the cooler paced, ether-soaked and more celestially esoteric. Zero convulsions or shock value contrivances, its feel is a constant flux of minor ebb & contrasting flow. An engrossing trip, it’s one that looks not out… but up. As it progresses – matched by sounds, by degrees tougher, more impressing and forceful, its pace imperceptibly increases. Galactic in feel, size and tone, piece by painstaking piece, another classic’s been built.

In delivering his fourth ‘JOOF Editions’ odyssey, John 00 Fleming feels that it’s “the most exciting of times” for the album to arrive. “Our sound is finally back where I dreamt it would be… And it only took 14 years he deadpans. That corner’s been turned and it’s become a force again. Year on year since they began, he continues, I see the ‘JOOF Editions’ releases as the ones that most clearly and authentically document that upswing”.

Be of no doubt though, said “upswing” is no chance happening, but the result of a concerted push by John and others. Taking one of trance (or even dance music’s) most inherently underground styles to arenas like A State Of Trance and Dreamstate is something that would have seemed improbable just four years ago. Fresh from playing ASOT’s first ever progressive stage last week, he said: “these things take time to resolve”. That’s healthy though, and naturally all the more satisfying for the time it took. The style, or indeed set of sub-styles, he considers are not ones you can pin words like ‘overt’, ‘instant’ or ‘obvious’ to. Paradoxically that’s one of its main appeals”.

John is in no doubt as to where the newer audiences for the style that ‘JOOF Editions 4’ typifies come from either. “Both ends”, he states. “In essence, our music is the only viable bridge between the trance genre as a whole and a swathe of other electronic music areas. By the same token, the opposite end of Trance had to run out of evolutionary road before the shift to progressive could happen. It had to reach a point where it couldn’t get any harder, or more uplifting, mainstream, extreme, etc. That cycle’s resolved now. Its race has been run. And that’s why we’re here”.

On finishing the compiling of ‘JOOF Editions 4’, he’s also 20/20 on where music for future ‘Editions’ will be sourced. It won’t be coming from trance. Our intake will be from the progressive and techno areas.