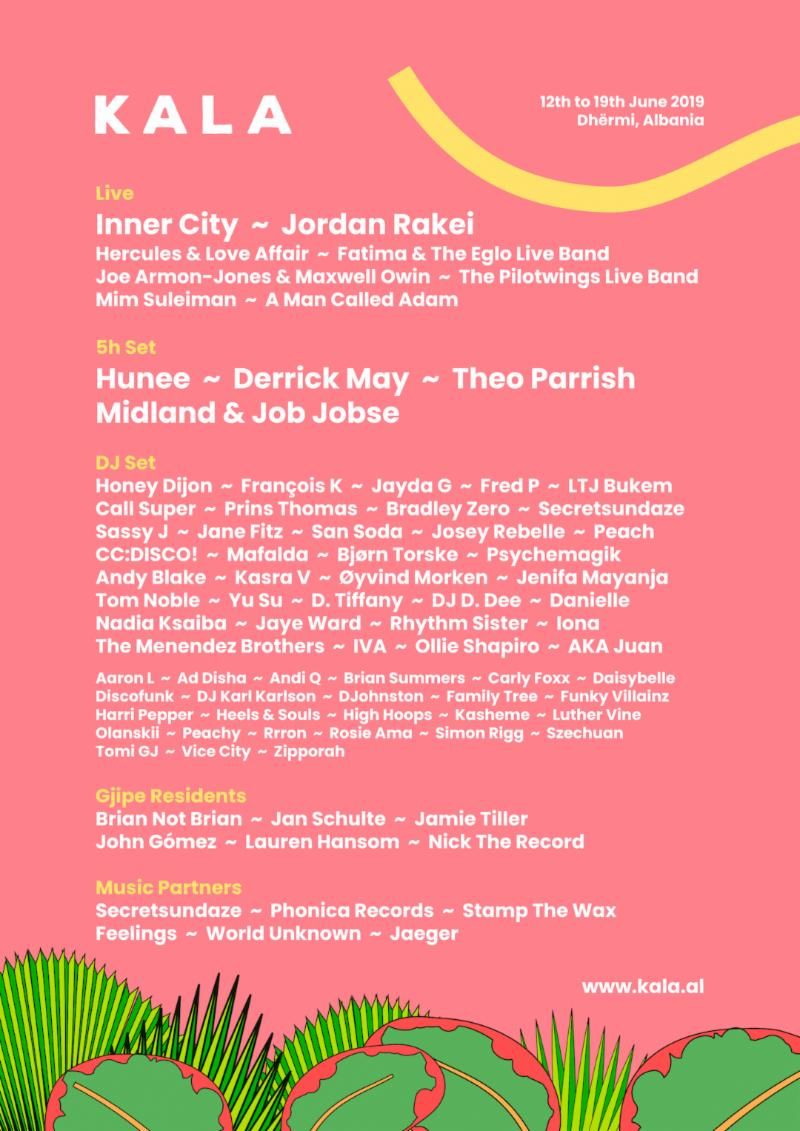 by ihouseuadmin
0 comments
Kala festival’s exploration of the glorious Albanian Riviera grows, with Hunee, Call Super, Jayda G, Kevin Saunderson, Hercules & Love Affair (DJ) and CC:DISCO! set to play DJ sets at the newly announced Secret Beach.
With its turquoise waters, open air seaside stages and the snaking canyon, the sense of escape that Kala offered was already vastly unique, but a new addition for 2019 will offer festival goers further exploration of the stunning Albanian Riviera. A secluded beach only accessible by boat sits next to a sprawling cave, as a bill of electronic music’s finest selectors dig deep in truly intimate surroundings. Each session will feature a 2h set by the host, and a scenic boat ride to this little slice of paradise. Only 180 tickets will be available for each session.
Providing the perfect soundtrack will be an array of diverse scene stalwarts and exciting rising talent. Rush Hour co-founder Hunee hosts a party of much smaller but no less stunning proportions after an extended 5h set on the main stage, while the legendary Kevin Saunderson will be branching out from his Inner City headline performance to take fans on a journey that’s never been so up close and intimate. Riding high on the euphoric disco-leanings of recent debut album Significant Changes, Jayda G will dish out exhilarating house gems with Call Super dealing in the heavier, glitchier side of techno juggernauts, and CC:DISCO! proves why she’s been attracting formidable acclaim on a global scale for her fusing of disco, house and boogie. There’s arguably no one better suited to beachside grooving than Hercules & Love Affair, the collaborative dance music outfit unleashing an unmissable DJ Set amongst a festival experience unlike no other.
Having previously announced 5h sets by Theo Parrish, Derrick May, Midland and Job Jobse, live performances by Inner City, Jordan Rakei, Fatima & The Eglo Live Band and Mim Suleiman, and DJ sets by the likes of Honey Dijon, Peach, François K, Yu Su, Psychemagik, Jamie Tiller and John Gómez, Kala continues to push the boundaries of modern festival programming, offering experiences truly unique to its location and ethos.

The festival programming is designed to give days to party, relax and explore the incredible surroundings. Besides the music events, Kala also offer a roster of holiday activities and wellbeing content, from yogaand beach massage to sooth those aching limbs after a little too much dancing, to
kayaking, snorkelling and pedalos to take up to the crystal clear waters, paragliding over Dhërmi beach and boat trips to explore the natural wonders of the Albanian Riviera, including the awe-inspiring Grama Bay, where ancient inscriptions can be found on the cliffs.
A wide selection of onsite restaurants and bars will be keeping festival goers fuelled throughout the week, offering a range of delicious Mediterranean food, including plenty of mouthwatering locally sourced vegetables and fresh seafood – straight from the sea to the plate!
From non-stop, action-packed fun to unusual extended sets by your favourite DJs, to sun-soaked beach days and exciting seaside locations, Kala Festival has something for everyone.
Over 90% of tickets for Kala 2019 have already sold out. Remaining tickets can found here: www.kala.al
KALA FESTIVAL – FULL LINEUP
Secret Beach Sessions:

Kala Festival 2018 Feedback:
“Party time in what feels like a paradise” – The Guardian
“Something truly exciting” – Crack Magazine