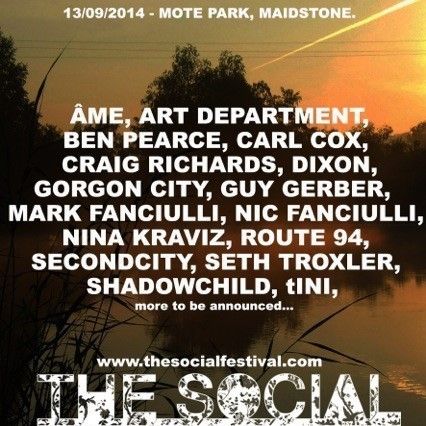 Joining already announced Carl Cox and Nic Fanciulli is one of the scene’s most recognizable figures, infamous in equal parts for his infectious productions and larger-than-life persona; Seth Troxler, who truly adds a Midas touch to any dancefloor that falls under his jurisdiction. Head honchos of respected imprint Innervisions, Dixon and Âme will each step up to treat festival goers to the melodic, immersive sound that has become synonymous with the label.

Recently announced Guy Gerber shot to the forefront of club culture with the release of his stand-out Fabric 64 mix last year, gaining him international notoriety and firmly cementing himself amongst dance music’s elite. Bringing a feminine touch to proceedings are techno diva Nina Kraviz and Desolat’s first lady tINI. No.19 front men Art Department have paved their way through the ranks of house and techno since they joined forces back in 2009. The Canadian production duo have smashed their way to notoriety with their distinctive deep, vocal driven house which will be perfectly framed in the stunning surroundings of Mote Park. Crosstown Rebels comrade Subb-an, who despite his young age, has already clocked up nearly a decade in the industry, will also be playing. His recent single ‘Say No More’ shot to number one in Resident Advisor’s March chart with rumors of his much anticipated debut LP on its way.

Having hit the top spot with his infectious house banger ‘My Love’ Route 94 will also be heading to Kent whilst current itunes chart topper SecondCity – with infectious summer anthem ‘I Wanna Feel’ – will be pounding the dancefloor of The Social’s VIP area alongside Gorgon City’s up-beat sound and Shadow Child’s bass-led grooves. Fabric’s Craig Richards and Nic Fanciulli’s brother and Saved partner in crime, Mark Fanciulli round off one of 2014’s hardest hitting line-ups for electronic music.

Having already smashed their way through four tears of tickets, and with further aces still up their sleeve, The Social is looking set to round off festival season in outstanding style.