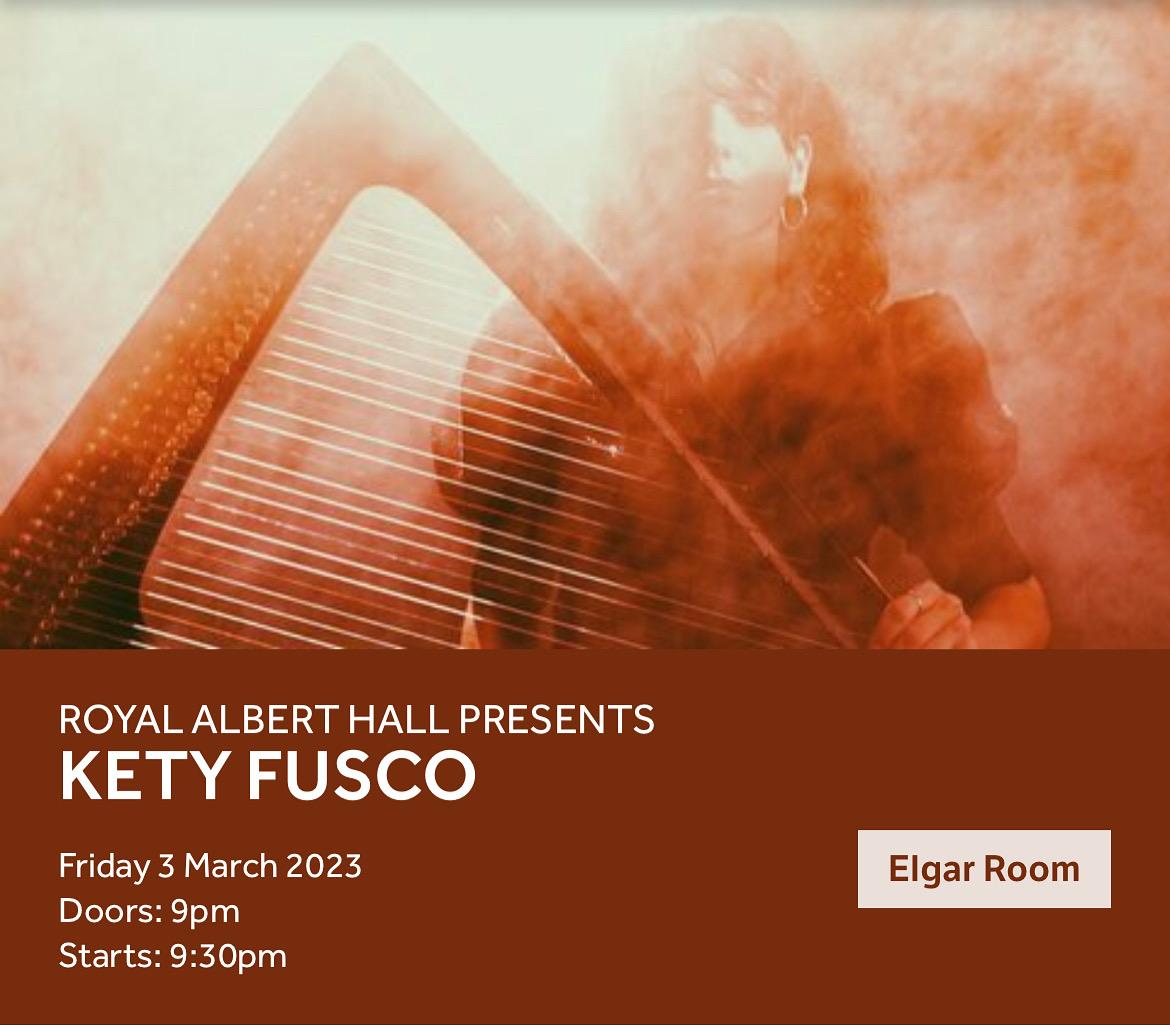 The musician and composer Kety Fusco was invited to present her first instrumental research album at the prestigious ROYAL ALBERT HALL in London.

The album will be released on 3 March 2023, the date on which Kety Fusco will play the show.

Three years after the release of her debut album DAZED, Kety Fusco has spent all her time between international tours, television projects, soundtrack productions. After creating her digital database of non traditional harp sounds named “Beyond The Harp” and named sound library of the month by Music Tech Magazine, Kety Fusco has embarked on a sonic research, in which she questions the instrument she carries with her since she was a child: the HARP.

“Does the harp have any defect?”
“Absolutely not!” all the harpists reply in chorus, with a hurtful expression.
But is that really the case?

As a harpist and harp lover, of course, she would also like to respond like all of her colleagues. As a composer, however, she has realized over the years that certain characteristics of the instrument involve ‘limitations’, if we really don’t want to use a derogatory term like “defect”.

The two main limitations in the sound emission of the harp, are the always accentuated attack and the lack of sustain, i.e. the possibility of prolonging the duration of the notes.

Obviously, this has to do with the physiological nature of “pizzicato”, but in any case it constitutes a not irrelevant compositional and expressive limitation. The harpists – for example – cannot attack a sound softly, as bowed instruments or many wind instruments do. Nor can they sustain the sound beyond the natural (and rather short) decay of the string’s vibration.

THE HARP as a project, is the development of a technique and technology that offers the harp the ability to overcome these ‘limitations’, and the composition of a new repertoire that exploits these possibilities.

Over the years, Kety has done a lot of research to extend the technical-expressive possibilities of the harp (both classical and electric) mainly through the implementation of electronic technologies (but also with the use of physical and analogue materials – the ‘prepared harp’ in a contemporary sense). And all of the solutions she has gradually found have become an integral part of the music she has created, for record release, concert or soundtracks for film, dance, theatre and installation.

THE HARP is a contemporary exploration of the harp as an instrument, in all its forms, both sonorous and structural. Chapter I is the first part Kety presented on CD and Vinyl: it chronicles the sound of the harp from the contemporary tradition, to the digital evolution, to her main goal of giving the harp a voice through a melody that commands the composition, up to the total deconstruction of the harp with noise sounds and wild rhythms.

Kety Fusco says about her album: “The Harp, Chapter I is an experience.
Imagine seeing the harp in reverse and that the opposite is the right direction of the instrument. Imagine, as a non-harpist, rubbing your finger on the harp strings and knowing that that sound has a real meaning. It is not the case. I would like The Harp to open the boundaries of the mind and open new creative solutions to harpists and non-harpists. I’m designing a new harp instrument, it will always be it, but contemporary and everyone will have the opportunity to approach it.”

Kety Fusco Experimental Performance w/ two Harps, light and Visuals is the new live project by musician and composer Kety Fusco in collaboration with visual artists Gabriele Ottino and Sharon Ritossa. A visual and auditory journey aimed at taking the spectator into an impromptu musical dimension, far from the classical canons of the harp and rich in moving images that suggest contemporary themes. Exploiting the materials of which a classical harp is made (wood, metal and gut), Kety Fusco produces sounds and settings that suggest its deconstruction, just as the visual artists have produced images that enhance the raw material of the instrument.