Singapore based alt-folk pop artist KHAi has a big year in-store. Returning with his third single “Victoria” as well as an accompanying video shot in Bangkok, Thailand, the visuals outline the ‘missed turns’ of long lost relationships.

Directed by Khomthong Rungsawang, KHAi candidly explains – “At some point in our lives, we are faced with the grim reality of unrequited love.”

“I have never met anyone in my life named, ‘Victoria’. But, to me, Victoria represents every person you could’ve had something with. Every missed turn or rain check. The possibilities are endless. It’s a song about fate. When I wrote ‘Victoria’, I didn’t have a specific person in mind. She is more of a mirage, an illusion — a personification of ‘the one who got away’.”

KHAi draws inspiration from the likes of Lewis Watson, Bruno Major, Nick Wilson, and Damien Rice, recreating the soul and sentiment of their music with his personal touch. His intimately crafted lyrics focus on the ups and downs of life – the ebb and flow of emotions.

After a year hiatus, KHAi is back to create songs that serve as a personal memo, mirroring his sensitivity with tunes that show great discernment of the anxieties and excitements of falling in and out of love. 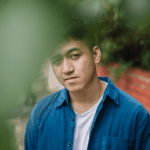