Khouba unravels his vulnerability by exposing his true state of mind in new track ‘Hallelujah’. The Paris based rapper showcases his desire to make it in the rap game. Smooth drill beats, introspective lyrics, and an effortless flow make ‘Hallelujah’ captivating and hard-hitting.

Paris Based Rapper, Khouba, has been honing his skills and taking inspirations from different music scenes for the past several years. Khouba blended the Afro, dancehall, and euro sounds that he encounters in Paris with More US influenced Lyrics. Bringing about a perfect marriage of the two worlds he is passionate about. Khouba’s inspirations allowed him to introduce and mix different elements and therefore extend the range of his sounds.

Defined as eclectic, he wants his music to convey a message but also his state of mind and mood to his listeners. After a solid debut with Jonah Hill, Khouba comes back with his Second Single Accelerate. In this track, Khouba hopped on the drill trend but with a melodic spin. In Accelerate, Khouba is more introspective and gives his thoughts on his upcoming success and shows his Hunger to accomplish big things. 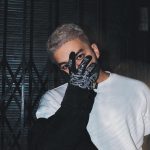