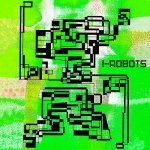 Continuing with a series that focusses on brilliant remixes of I-Robots originals, Opilec Music now bring together two more Italian legends of the scene in Alexander Robotnick and Daniele Baldelli & Marco Dionigi. They both turn out reworks of  ‘Kind of Intrigue’ from 2009 as part of an on going project that is all based around the impact of Isaac Asimov’s Laws of Robotics and features art by Tamami Saito. Santiago Salazar and Mr. Raoul K, Los Hermanos and Gary Martin and more are all part of this on going concept which again comes up with the goods here.

Alexander Robotnick is a living electronic music legend from Italy who pioneered an Italo disco sound in the 80s and is still going strong. From scoring films to remixing big name stars via turning out essential electro tracks, he is a top talent who proves that once more here.

His excellent version of the original is built on firm kicks and has big colourful chords, wavy bass and twinkling melodies all making for a serene, spaced out groove. Muttered vocals and sci-fi signifiers all make it a hot and steamy affair perfect for summer sessions.

Daniele Baldelli is a cult star from the Italo world and here he teams up with Marco Dionigi to make for a dream production pairing. Dionigi is boss of Quantistic Division and has turned out many seminal albums and EPs since the mid 90s. He was there at the birth of digital technology, has created new genres such as Slow Motion and knows how to cook up a hypnotic melody, as evidenced here.

Their take on ‘Kind Of Intrigue’ is more subtle and stripped back. It has widescreen synths stretching in all directions, wet and gurgling disco arps and spoken word monologues musing on robots. It is perfectly trippy and analogue and is stuffed with classic Italo vibes of the sort that will make it a big hit with boat parties crew and Balearic lovers everywhere this summer.

This package is another in a long line of classic but modern disco releases that prove Opilec Music does things properly each and every time.