Ramz Drops Music Video For ‘Don’t You Play With Me’ Ft. LD

Ramz Drops Music Video For ‘Don’t You Play With Me’ Ft. LD

Brit Award nominated rapper Ramz unveils the visuals for his new single ‘Don’t You Play With Me’ ft. LD.

Premiered today on GRM, the video for ‘Don’t You Play With Me’ was shot in London, directed by Chris Chuky (who also collaborated on the video for recent single ‘Hold You Down’) and features masked rapper, LD (who made his name as part of Brixton Collective 67).

‘Don’t You Play With Me’ ft. LD is part of Ramz’s first full body of work, the recently released Blockbuster EP, which sees him collaborate with a variety of producers ranging from Banx and Ranx (Sean Paul, Lady Leshurr, Dua Lipa) to Raogart (B Young) andCrumz. Other highlights on the EP include the Certified Platinum ‘Barking’, the Certified Silver ‘Family Tree’ and the recently released ‘Hold You Down.’

Drawing on a broad spectrum of musical influences and featuring a variety of carefully selected guest artists, the Blockbuster EP documents Ramz’s journey to date, while showcasing his versatility as an artist. A little over a year ago Ramone Rochester (aka Ramz) was studying Sports Development at university and working at Sainsbury’s. Then he dropped his debut single, ‘Barking’ and it all changed…

Having amassed 2.2 million+ record sales, 370 million+ streams and 86 million+ YouTube views across three single releases, Brits 2019 nominated Ramz has achieved a number of ‘Firsts’ over the past 18 months: he is the first ever act to achieve a #1 on Spotify with their debut single, has notched up the most viewed video of all time on GRM Dailyand, with ‘Barking’,scored the most streamed UK Urban track of 2018 and a #2 on theUK Official Singles chart (crowning him as the highest charting British urban artist since 2015).

Earmarked by The Fader as an artist who “deserves to blow up in 2018” and described by Pigeons & Planes as “poised to make a real impact in 2018”, Ramz has delivered on the hype, cementing his reputation as the upcoming British artist to watch. With an unprecedented rise to glory that is testament to an ever-evolving and expanding UK music scene, Ramz’s lyrics provide a time capsule snapshot of the corners of the capital and are as relatable as his success-story is aspirational. While he may be a newcomer to the game, Ramz is holding all the Aces and his ambitions are sky high. 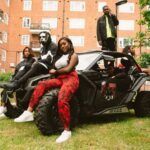