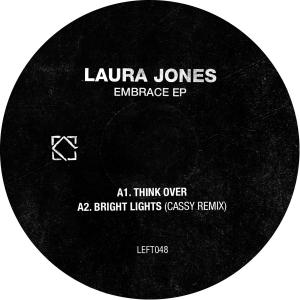 Laura  Jones is a rare specimen, a producer who puts her heart and soul into every production. The few key releases she has made for Crosstown Rebels, Visionquest and Leftroom have become instant anthems and shot her into stardom.

‘Embrace’  sees  a  return  to  Leftroom  and  to  form  for  Laura  with  the  title  track  and  ‘Bright  Lights’  two electrifying  bombs  with  stirring  melodies  and  her  signature  piano  playing.  However  there’s  also  new exploration  into  darker  techno  underworlds  with  ‘Think  Over’  and  ‘Imagination  Unreal’,  illustrating  the complexity  and  breadth  of  Jones  as  a  producer.  Remixes  from  Cassy and Paul Du Lac make  this  a timeless package poised to set the future months alight.

Laura Jones strode into our lives in 2011 with ‘Love IN Me’ on Visionquest, a summer anthem that filled her  diary  for  the  year  almost  overnight.  But  Laura´s  story  didn´t  just  begin  with  a  big  track  and  an  eye condition  that requires  her  to  wear  the  glasses  that  protect  her  vision. It began at an early age  spending every penny collecting music, buying  vinyl like her life depended on  it. Bucking the trend of one hit wonder producers she´s earning a reputation as a DJ´s DJ.

Since her debut hit she´s  earned a reputation as a producer with depth and style thanks to  timeless pieces  that  centre  around  her  classical training  and sultry vocals. With over twelve years of piano training and  three  in  cello  and  clarinet,  Laura  understands  the  dynamics  of  composition  away  from  the  bedroom computer  and  her  tracks  EPs  and  compilation  CD  have  found  homes  with  key  labels  such  as Leftroom, Visionquest  and  Crosstown  Rebels.  While  her  remixes  breathe  new  life  into  house  classics  like Romanthony´s  ´Let  Me  Show  You  Love,  Hollis  P  Monroe´s  ´I´m  Lonely´  and  her  forthcoming  anthemic underground remix of Todd Terry´s ‘Bounce to the Beat’.