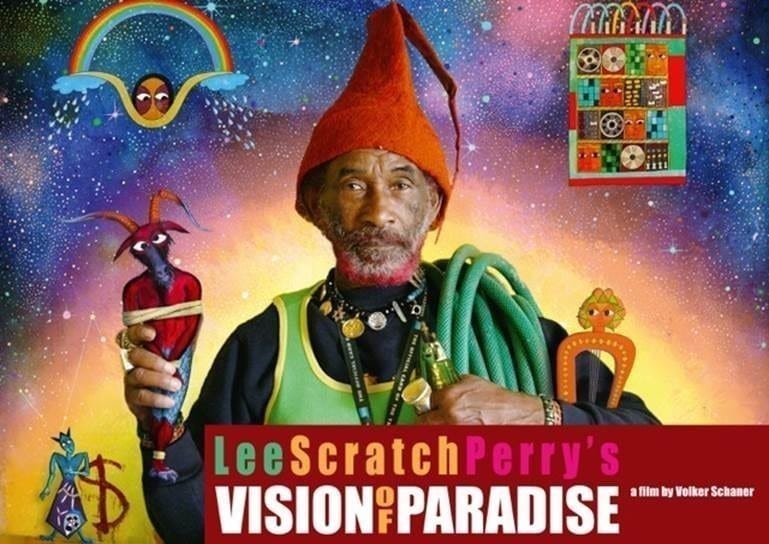 Lee Scratch Perry’s Vision Of Paradise is the ultimate portrait of a true musical icon. This UK premiere gala screening is open to the public and includes a Q&A with Lee and director Volker Schaner. The movie will be in cinemas this September and available on DVD/VOD this autumn.

For the past 15 years Volker has followed Perry on a spiritual and geographical journey taking in Jamacia, Ethopia, Germany, Switzerland and London. Over this period Volker has earned Perry’s trust, resulting in a never-before-granted level of access and insight into Perrys’ fantastical, spiritual world. This classic-in-the-making tells a story of epic, magical propotions that’s not a biography, more fairytale documentary, which is in turns funny, poetic and frequently mind blowing.

In additon to filmed footage of the man himself, plus an all-star cast of dub and reggae-related musicians, Lee Scratch Perry’s Vision Of Paradise is illustrated using unique  animated scenes, that are influenced by both Ethiopian Christian Orthodox Church Art and the Beatles’ Yellow Submarine.

Lee Scratch Perry is a godfather of both reggae and dub. Starting in the late 60s with The Upsetters, he wrote the book on Jamaican mixing desk trickery, then constantly ripped it up to create new aural blueprints for the music, via his Black Ark productions of the following decade. He has since then charted a waywardly idiosyncratic path, which has ensured legions of followers absorbing his every move.

In the early 1960s, Lee’s mixing board experiments resulted in the creation of dub. He is synonymous with his innovative production techniques and renowned for his studio band The Upsetters.

In 1973, he built The Black Ark studios, where he produced records for iconic musicians like Bob Marley & the Wailers, Junior Byles, Junior Murvin, The Heptones, The Congos and Max Romeo.

By 1978 The Black Ark had fallen into a state of disrepair and eventually, the studio burned to the ground; Perry insists that he torched the studio himself in a fit of rage.

Lee’s song Enter the Dragon was sampled by Panda Bear from Animal Collective. He was then selected by A.C. to perform at All Tomorrow’s Parties, which the band curated in 2011.

Lee has won a Grammy, Rolling Stone Magazine featured him in their list of the 100 Greatest Artists of All Time and his collaborative albums with The Orb were met with widespread critical acclaim.

Although 79 years old, Lee is fit, sprightly and at a creative peak. He divides his time between Jamaica and Switzerland.