Legendary label Sub Pop to curate stage at OFF Festival 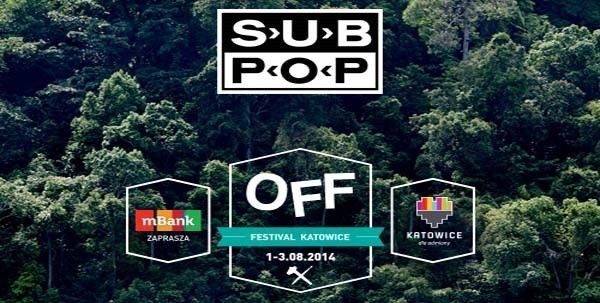 Legendary label Sub Pop to curate stage at OFF Festival

Artists signed to America’s legendary Sub Pop record label are frequent guests of the OFF Festival, but this time we’re taking things one step further! Sub Pop will be taking over the Experimental Stage for an entire day, serving up a lineup that features Wolf Eyes, Clipping, Rose Windows, and more!

Sub Pop has changed the history of music on at least one occasion. In the late 80s Bruce Pavitt and Jonathan Poneman decided to launch their own label to promote music that was similar to the bands on SST and Touch and Go, but more listener-friendly. Sad and dirty, but catchy. The Seattle-based label took inexperienced rookies and their bands under its wing: Nirvana, Soundgarden, MudhoneyŠ Despite the enormous commercial success of grunge rock, the label never lost its indie cred, and has instead become a trendsetter over the last two decades. Though Sub Pop started out as a rock label, it’s made a name for itself outside the guitar world, fostering the careers of such greats as The Postal Service, Fleet Foxes, and Shabazz Palaces; according to several influential music review sites, the experimental hip-hop on Black Up was the best thing to happen to music in 2011. And so we’re proud to announce that Sub Pop will be one of the curators of the Experimental Stage at this year’s OFF Festival. The lineup selected by the label will perform in Katowice on August 1.

Tickets:
Three-Day OFF Festival Passes are now available at the OFF Shop. These passes are valid for all shows at Three Pond Valley. The price of the pass is a low 180 PLN / 42 EUR! Hurry up: the price goes up in March.

1. This year, the price of the pass does not include a camping spot. You can buy a separate camping spot for 60 PLN / 14 EUR (this lets you stay at the campsite from Friday, August 1, to Monday, August 4). If you buy a three-day camping spot and want to come to Katowice a bit early, you can purchase an extra night (Thursday/Friday) for 25 PLN / 6 EUR per person.

2. As always, we’re planning a Before Party in downtown Katowice on Thursday, July 31, but the event will be slightly different this year. To enter, you need to buy a separate ticket. A detailed schedule for Thursday night will be announced shortly.

About OFF Festival:
A truly unique boutique music festival, OFF Festival takes place annually in August in ‘Three Lake Valley’, Katowice – a beautiful green oasis in the heart of industrial Silesia. OFF Festival is a way of life, one that flies in the face of current trends and stays true to itself, and the ethos of organiser Artur Rojek is firmly aimed at supporting art and music with the festival bringing many acts to Poland for the first time.

Growing in prominence year on year with this years event promising one of the strongest line-ups to date in line with Rojek’s forward-thinking, eclectic music policy. From the greatest alternative music stars from around the world to showcasing artists form the increasingly strong Polish scene, OFF has inspiring music in abundance.

Over the years, OFF has amassed its own demanding yet appreciative audience who come to witness Artur Rojek’s musical vision come to fruition. Having gained and a well deserved reputation in Poland and abroad, it’s not without reason that it has been said and written that OFF is the best alternative festival in this part of Europe and the only place east of Berlin where one can catch a glimpse of the boldest and eclectic acts on stages worldwide.

As well as music, OFF features a number of accompanying events: film, art, performance and poetry. It’s also an event which keeps the environment in mind – all food and drinks come in environmentally-friendly packaging and there is a big emphasis on recycling. It’s a completely safe place, an event where diverse tastes and appearances are welcomed and where everyone is the same because everyone is different.