Legendary trip-hop duo Kruder & Dorfmeister have emerged from the depths to announce the release of their long-awaited album, 1995, with the first single, ‘Johnson’, which has dropped along with its hypnotic music video via G-Stone Recordings.

1995 was mastered by the esteemed Bernie Grundman (Steely Dan, Michael Jackson, Dr. Dre) and will be released on the 30th of October, 2020. Revolving around the endless flow of experience, 1995 materialized from the self-same primordial cloud of smoke, sounds, memories and feelings from which two stand-alone classics in The K&D Sessions and the duo’s DJ-Kicks came into being. Pitchfork, DJ Mag, Mixmag, New Yorker, Exclaim!, Medium, Stereogum, and Billboard Italy have all praised the duo’s work and they have seen radio support from the likes of BBC Radio 6’s Nemone. The pair have sold millions of albums worldwide and have accumulated hundreds of thousands of plays across digital streaming platforms. K&D consider the UK their “second home base”, with two sold-out shows at London’s Roundhouse in 2018, shows at the Hammersmith Apollo, London, and Albert Hall, Manchester, in 2019, and an extended European tour in the works for May 2021.

Composed of Peter Kruder and Richard Dorfmeister, the Viennese duo started making music together in the early 1990s. Their roots draw influence from hip hop, rare groove, dub and new wave, and their sound finds company alongside Massive Attack, Tricky and Thievery Corporation. Through the years, the two have engineered the successes of multiple projects including Tosca, Peace Orchestra and Voom:Voom, and official remixes for the likes of Depeche Mode, before now making their return as Kruder & Dorfmeister to take us all back to that one Viennese front room that has once again turned its bass bins out to the cosmos.

Harkening back to days spent behind Akai samplers and a dusty mixer, ‘Johnson’ features the warbling sounds of Robert Johnson laced with a trippy, downtempo groove and a soundscape infused with delays and celestial synths. Their ethereal ideas are channelled through nuanced builds, breaks and flips, challenging rigid notions of space and time. This is “K&D time” – Kruder & Dorfmeister have again encapsulated the smoky atmosphere of a boundless cosmic dance floor. Delicately dancing around the futuristic post-apocalyptic theme, Kruder & Dorfmeister allow the downtempo grove to lead both the song and the music video. ‘Johnson’ leads the viewer on a journey of self-imposed suppression as well as the soaring freedoms felt once those shackles are lifted.

Video directors, Oscar Pecher and Stefan Pecher said about the inspiration behind the video, “When we heard the track for the first time, pictures immediately came into our minds. The cinematic, atmospherically dense sound, supported by emotional vocal samples, reduced breakbeats and deep basslines gave us a lot of visual input. Someplace that has stood still in time, the dark corridors, the mysterious musical mood that fits the current time, combined with a young, sensitive leading actress whose sluggish movements increasingly develop towards dance as the track progresses.” 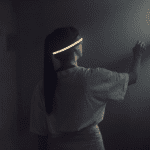