Lazy Light is the latest single from the album I Bloom released earlier this year and is co-written with William D Drake of The Cardiacs.

It’s been remixed by Mercury Prize winner Mike Lindsay (Tunng) and takes you on a laid-back journey through a smoke-filled landscape. The track opens with pitch bending guitars, much like Connan Mockasin or Mac DeMarco and simmers down into a super chilled stoner backbeat. Mieko’s easy liquid style, backed by haunting vocals from William D Drake create a cocktail perfect for a lazy, hazy summer afternoon with nowhere to go and nothing to do.

Mieko and her brother, Yasuaki Shimizu (also a critically acclaimed artist), arrived in London with a singular goal in mind – to subvert all expectations of a Japanese female artist. A statement of intent, Mieko broke into the UK electronic movement under the moniker of Apache 61, garnering plays by John Peel and quickly building a name across the underground scene dominated by male contemporaries. She soon signed to Haruomi Hosono’s (Yellow Magic Orchestra) label releasing her eponymous album and led to her remixing tracks for YMO. She is an enigmatic live performer and has supported the likes of Goldfrapp, Massive Attack with Riz MC at their Meltdown Festival and with Kraftwerk at Sonar, Barcelona. 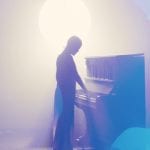