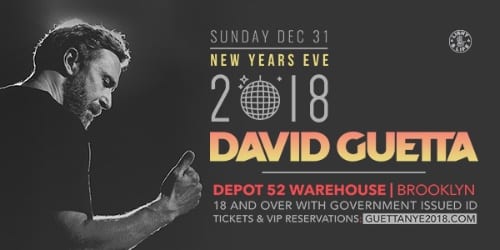 Globally renowned Grammy award winning producer and DJ, David Guetta, showcased by Light & Life, returns to New York to help ring in 2018 with an unforgettable warehouse affair. The New Year’s Eve bash will be held at Depot 52 on Sunday, December 31st and tickets are on sale now!

With over 10 billion Spotify plays and 50 million album sales, David Guetta is arguably one of the world's most successful producers and DJ’s. Guetta is a master at curating international smash singles with radio play around the globe featuring top entertainers such as Nicki Minaj, Madonna, Sia, Akon, Rihanna, The Black Eyed Peas and more. Partygoers can expect a captivating performance from Guetta at the New Year’s Eve warehouse event.

Light & Life prides itself with bringing large-scale and high quality events to the city of New York by featuring only the best that electronic music has to offer.

Tickets for the event are now available here.