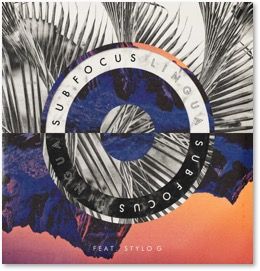 Sub Focus is starting off 2017 with a brand new original track, ‘Lingua’ featuring Stylo G. It follows up the success of his first two new tracks in years, ‘Nobody Knows’ and ‘Love Divine’, each receiving widespread radio support from the likes of Mistajam, Danny Howard, Phil Taggart and Annie Mac – who crowned ‘Love Divine’ her Hottest Record.

It’s the third track out of a new wave of club-focused material from Nick Douwma, that has seen him rediscovering and repurposing the old techniques and sounds behind the jungle, garage and house tracks he grew up listening to in the 90’s.

The release comes just after of an exciting headline show at London’s world famous Brixton Academy, for respected label RAM Records’ biggest event of the year on New Year’s Eve. It’s his second headline show at the venue of the past few months, after he headed up Halloween for famed promoters Together – with whom Nick also holds a residency at Amnesia Ibiza which is set to continue this summer. He’s now looking forward to plenty more high profile headline gigs  at the likes of Motion in Bristol and London’s newly launched Printworks as well as bringing back his live show in the summer for a run of festivals.

With such widespread support across BBC Radio 1, as well as specialist support from fellow high profile DJs like Andy C and Chase & Status ‘Lingua’ looks set to raise Sub Focus’ profile even further.