Live At Leeds Announces First Wave Of Artists For 2018 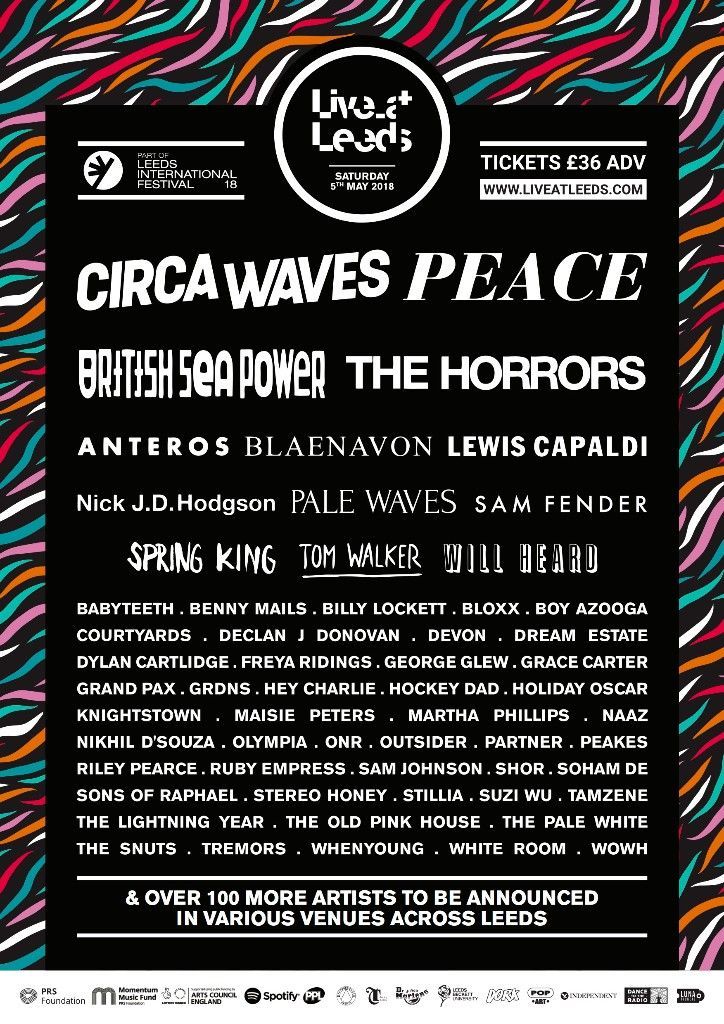 Live At Leeds Announces First Wave Of Artists For 2018

After the sold-out success of 2017, Live At Leeds is set to return on May 5th 2018 once again bringing the most exciting names and sounds to the city for a true coming together of the best in new music.

The starting gates of the summer festival season, Live At Leeds has become a go-to destination to see the artists that’ll be making their mark in the months and years ahead. Guaranteed to provide festival-goers their next favourite band, the multi-venue event has previously played host to the likes of The 1975, Bastille, James Blake, Years & Years, Rudimental, Stormzy, Sam Smith, Ed Sheeran, Rag ‘n’ Bone Man and more on their way to global acclaim.

Leading the way in 2018 are some of the most exciting British bands of recent times, continuing their unprecedented journeys to the top. Peace are a true revolution, taking 90s soaked guitar-pop to glorious heights each and every time they step on stage. Since emerging out of the B-Town scene in Birmingham, they’ve played some of the biggest stages in the world, capturing the sound of a generation with debut album ‘In Love’ and then again on follow-up ‘Happy People’. Signalling their hotly anticipated return in 2018, expect their set at Live At Leeds to be an eruptive call to arms of where the revolution goes next.

Returning with a bang, Circa Waves are a band born for those moments when thousands sing along and throw themselves into every note. Lead by the dynamic Kieran Shuddall, second album ‘Different Creatures’ landed earlier this year, laying down their ambitions with a dangerous and powerful collection of tracks that signalled their next step. With favourites such as ‘T-Shirt Weather’, ‘Wake Up’, ‘Stuck In My Teeth’, ‘Fire That Burns’ and ‘Young Chasers’ bound to go off in fevered frenzy, the indie-kings will be proving their crown at Live At Leeds this year.

Renowned for shape-shifting and reinvention, The Horrors are a band in their prime. Since forming in 2005, their every move has been captivating – jumping from the rawness of debut album ‘Strange House’ to famed classic ‘Primary Colours’ to the panoramic prowess of ‘Skying’ and the bristling pop-climbs of ‘Luminous’, they’re a band that can’t be pinned down. Their latest album ‘V’ received vast critical acclaim when released, standing as one of the albums of 2017. With a ferocious and visceral live-show to boot, The Horrors are an essential band of our times, and a must-watch at Live At Leeds.

Unparalleled when it comes to hosting the future global superstars across Leeds City Centre, this year is no different at Live At Leeds – with the revered BBC Sound Of… list heavily represented at the festival. No new band may be bigger than Pale Waves, who’ve become the most talked-about emerging act on the planet with just three singles released into the world. Combining sublime pop hooks with a 1975-esque knack for shimmering darkness, they’ve already garnered a devoted and loyal following. With magazine covers, sold-out shows and more already streaming from them – Pale Waves are a sensation that’ll be reaching fever-pitch by the time Live At Leeds comes around. Likewise also set for a mammoth 2018 are fellow ‘Sound Of…’ picks Tom Walker and Lewis Capaldi. Writing emotional tales of life and love, Tom Walker has seen the globe over the past year, with TV appearances, devoted evenings of adoration and over 70 millions streams to his name. Expect him to be on the verge of chart dominance by the time Live At Leeds opens its doors . Scotland’s Lewis Capaldi has seen plaudits and 2018 nods flowing in all directions. Delicately raw, he’s been taken into the hearts of the nation – with a sold out tour set to round out 2017 in style. 2018 is primed to be the year Lewis Capaldi goes big, following on from his slot at Live At Leeds’ Ones To Watch event in November – where he was joined on the bill by Sam Fender, also announced for Live At Leeds 2018. With a gritty melodic heart, he’s destined to become a crowd favourite thousands will sing along with, building on his early releases and into the new year. Live At Leeds once again has its finger firmly on the pulse of the new music world, with the most exciting names going heading to Leeds city centre in 2018.

“This will be my third year playing Live at Leeds. Last year I wasn’t sure what to expect but the venue ended up packed out and people were struggling to get in, it was such a sick show! It’s an honour to be invited back to play for 2018, can’t wait!”

The band behind one of the most acclaimed indie releases of the year, Blaenavon are on a sensational path. Melting carefully crafted hooks with infectious guitar-laden anthems, the trio have become one of the breakthrough bands of the past 12 months, with debut album ‘That’s Your Lot’ leading to them headlining bigger and bigger venues. Expect their set at Live At Leeds to be a congregation of future brilliance. Spring King are a band built on a phenomenal live presence. Debut album ‘Tell Me If You Like To’ signalled the arrival of a band who revel in kicking down the front door with their infectious garage-indie sound, and with new music teased for next year, their set at Live At Leeds is the start of a new era, built on the past. Equally building on an incredible journey so far is cult icons British Sea Power, bringing a rich legacy to the festival with a set ready to challenge and charm at the same time.

"We've been lucky enough to play Live at Leeds a few times before, and it's never disappointed. It's an amazing city and consistently one of our favourite festivals –  we can't wait to play again this year!"

Making their way through the ranks in 2017 and now geared for a dazzling 2018, Anteros are a band the world should know about. With a glam-soaked cannon of glitter, pop-chimes and style, the likes of ‘Bonnie’, ‘Drunk’ and the self-titled ‘Anteros’ are the sort of tracks that straight-away make their home in your ears, and their set is sure to be a bountiful moment of stars in the making. Making his step into stardom, Will Heard will head to Live At Leeds next year with his soulful take on jazz set to invade the pop charts. With an unprecedented voice that’s bound to be heard across the airwaves in the years ahead, Live At Leeds is a chance to witness his talent in the flesh, first.

Across the spectrum, Live At Leeds delivers. Whether it’s the grunge-pop kicks of Bloxx who’ve been tipped by the likes of Sundara Karma and INHEAVEN to break through next, the street-pop realness of Suzi Wu, the swooning garage-indie of Irish trio whenyoung, the menacing heavy-hooks ofThe Pale White or the sublime voice of Grace Carter (whose breakthrough statement ‘Silence’ points to a huge future) – Live At Leeds has something for everyone. Londoners Stereo Honey are another act destined to be the talk of indie-lovers around the globe, with tight melodies and gorgeous dream-pop anthems ready and waiting, something they have in common with Australia’sHockey Dad bringing the sun-kissed gleams to Live At Leeds for what’s sure to be one of the most infectious sets of the festival.

“Live at Leeds is one of the first festivals we ever played. We’re very excited to be coming back.”

‘Ones To Watch’ alumni The Pale White said:

“Live at Leeds was one of our highlights of 2017, a proper rowdy crowd who were up for it from the off. The festival is known for giving really great emerging artists a platform so we were incredibly flattered to be asked to headline their Ones to Watch 2018 showcase. We can't wait to hit the festival again and bring some brand new songs with us.”

“I'm very excited to come up to Live at Leeds in May. It'll be my first time visiting the city and I get to play… what madness!”

With over 50 names confirmed in total, Live At Leeds is set to once again be the defining and only place new music fans need to go to witness their next favourite band. From former Kaiser Chiefs titan Nick J.D Hodgson embarking on his stunning solo career, to the gifted warm-synths of Naaz, the sizzling kicks of White Room, the North London swagger of Sons Of Raphael and the direct rips of Stillia and Babyteeth – there’s always something seismic around the corner, waiting to be discovered. The landmark destination for 2018’s soundtrack, Live At Leeds is once again essential.

“I went to Live At Leeds last year and I’d only just started recording my solo stuff so to be playing it 12 months later is an unexpected buzz. Being from Leeds I’m excited to be playing a hometown show too."

“Leeds is our home so we're thrilled to be playing the festival this year amongst so many amazing bands. Knowing a lot of our friends will be on the line up too, makes it that little more special!”

“After arguably our strongest year for the festival in 2017, we’re excited to announce the first of many artist names for Live at Leeds 2018.

The festival has always been about showcasing new music and offering emerging artists a platform to build their audience in the North and this year is no different.

Joining the bill for 2018 we see acts included on the BBC Sound of 2018 longlist in Pale Waves, Sam Fender, Tom Walker and Lewis Capaldi, hotly tipped local artists like GRDNS and Peakes and hyped acts such as Blaenavon, Will Heard and Anteros. And of course, as always, we have a great selection of established and respected artists heading up the bill, like Circa Waves, Peace, British Sea Power and The Horrors. Firmly placed as the first festival of summer, this year will once again be an excellent demonstration of the must see artists of 2018- we hope you can join us to discover your new favourite band.”

Tickets for Live At Leeds 2018 are on sale now, starting from £36 – available from https://www.liveatleeds.com/

For further details and information, head to:
https://www.liveatleeds.com/

Leeds International Festival is an annual celebration of new ideas, local creativity and international culture taking place April 28th till 12 May 2018. The first festival took place in 2017 and brought 17,000 people into the city.

It’s a programme of compelling speakers, original performances, new music, seminars and discussion. The goal is to inspire and grow communities by bringing people together and promoting the discovery and exchange of new ideas, whilst creating one of the biggest events in Leeds.