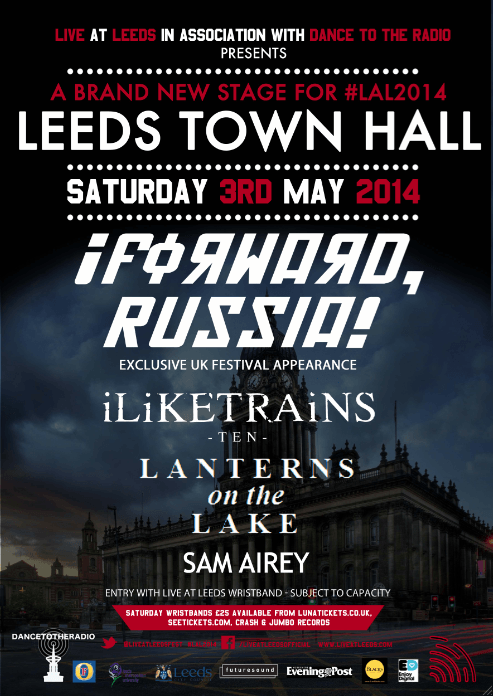 This years exciting addition of the Leeds Town Hall as a new venue for Live At Leeds brings with it one of the finest home grown lineups going! In a city full of musical heritage, few buildings hold as much cultural gravitas as the Town Hall. Built between 1853 and 1858 and opened by Queen Victoria, the beautiful structure has been a hub for music, film and education for many years making it a true cultural mainstay of the city.

The inimitable ¡Forward Russia! will be reforming to headline proceedings and bring with them their famed and oh too missed angular, jarring post-punk. Having last performed as a one-off to celebrate the 100th birthday of the legendary Leeds Brudenell Social Club at the tail end of last year they’re a true part of the city’s music scene and a more than welcome addition to this year’s Live At Leeds lineup.

“After playing the 100 year anniversary at the Brudenell last year there was really no intention to do anything else. We never played Live At Leeds the first time around, but the opportunity to headline such a great venue with great friends was too good to turn down. We played with I Like Trains loads and I played live with Sam.” – Whiskas, ¡Forward Russia!

Joining them will be Leeds locals I Like Trains. The brooding post rock quartet recently celebrated ten years as a band and continue to captivate audiences with their fascinating and brilliantly original music. Having joined headliners ¡Forward Russia! in celebrating the Brudenell’s centenary by performing and re-releasing their debut EP Progress/Reform, the band know Leeds better than most and their historically rooted songs are a perfect match for both the venue and the festival.

“Not only are we excited to be playing such a grand old venue in Leeds for the first time, we also get to share it with friends and co-conspirators Forward Russia and Sam Airey.  Throw in Lanterns on the Lake and there is no reason for people to leave the Town Hall.  Our 10 year history is inextricably linked with Forward Russia.  Tom and Whiskas were working at our very first show, Whiskas put out our first single on Dance to the Radio and we’ve remained good friends and collaborators ever since.  It is great to see them doing their spiky thing once again.” – Dave Martin, I Like Trains

Part of the ever-excellent Bella Union stable, Newcastle’s Lanterns On The Lake find inspiration in the sprawling coastal scenes of the North East and this is reflected in their brand of sometimes grand and cinematic, sometimes introverted and anxious but always beautiful post-rock.

With a debut album on the way Sam Airey’s BBC 6 Music championed music has placed the folk wunderkid as a true one to watch. The Welsh-born but Leeds residing musician will be bringing his full band show to the Town Hall and with it songs from his acclaimed ‘A Marker & A Map EP’.

“Truth be told, I’m excited! I’m fairly certain it’ll be the biggest Leeds show we’ve played as a full band, and pretty wonderful to be sharing the stage with bands who are not only are musicians I admire but also mates of mine (ahhhhhhhh). FR and ILT were the first bands I was really aware of when I moved to Leeds a few years ago, and I look up to them not just musically but in terms of their ambitions, and also their attitudes towards making music and creating a sense of community amongst their fanbases. I played with Lanterns on the Lake a couple of times around when I was first starting out so it’ll be fun to join them once again – they’re one of my favourite bands in the UK right now and their latest record is really great” – Sam Airey

ALL OTHER ARTISTS TO PERFORM SATURDAY 3rd MAY ACROSS VARIOUS VENUES