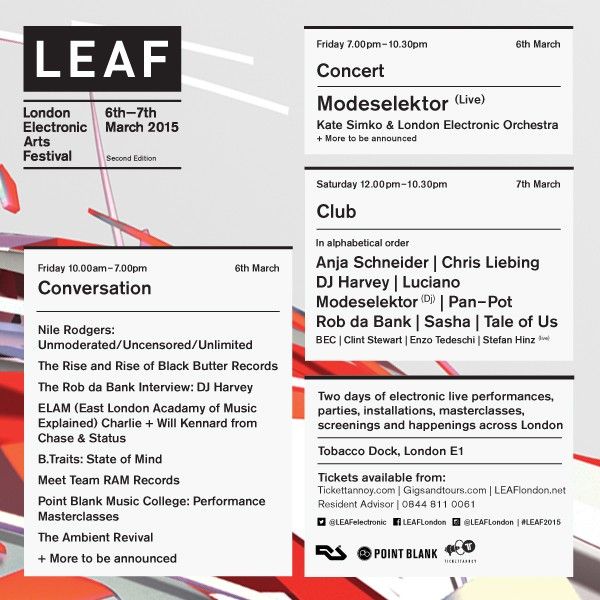 Building on the success of the first edition of LEAF, the organisers have now turned to Grade one listed Tobacco Dock –  one of London’s most exciting and stunning venues.  This will act as a central location for a combination of talks by key artists and industry icons, demonstrations of the latest technology and showcases, live performances  and DJs.  LEAF 2015 will centre around Tobacco Dock but there will be additional off site events in some of London’s key nightlife locations.

LEAF is excited to announce the first additions to the Friday LEAF Conversations which includes the legendary Nile Rodgers.  The multiple Grammy award winning artist will be presenting a talk which will be Unmoderated, Uncensored and Unlimited. Rodgers admits to not enjoying having moderators or being told to stop during talks, so LEAF has given him the floor for as long he wants for his talk.

Attendees will also get the chance to meet the leading lights behind some of  the hottest dance labels on the planet, including Black Butter Records (first home of Rudimental, Clean Bandit and Jessie Ware) and RAM Records (the label from Andy C), from artists to managers to the booking agents, there will be the opportunity to hear the story of their meteoric rise.

Also LEAF are very proud to confirm that legendary disco DJ, DJ Harvey will be interviewed by Rob da Bank – expect a no holds barred, frank and enlightening conversation by one of the scene’s most influential players.

Also confirmed is a presentation and discussion from Will & Charlie Kennard – who are behind ELAM – the East London Academy of Music. Will is one half of Chase & Status, whilst his brother Charlie is running the new government-funded school for modern music. In addition, music school Point Blank will return with an entire day of Masterclasses from leading electronic artists. And BBC Radio 1 DJ B-Traits hosts a discussion titled ‘State of Mind’ following her controversial BBC documentary How Safe Are My Drugs?’ where she visited users and dealers to find how much they know about the drugs they are taking.

On Friday evening as day 1 of LEAF draws to a close, the Great Gallery at Tobacco Dock will open its doors to a very special live performance by  Modeselektor for LEAF Live. This unique space will lend itself perfectly to a concert performance from one of electronic music’s leading ambassadors. Wildly diverse, infused with exuberance and punctuated by a slap of the absurd, Modeselektor’s inarguable grooves seem to emanate from every conceivable musical genre

Saturday is the main LEAF event at Tobacco Dock with an incredible line-up of some the world’s most revered electronic artists spread across 3 distinct rooms of music.  Luciano, Tale Of Us, Sasha, DJ Harvey, Pan-Pot and Anja Schneider joined alongside Chris Liebing, Modeslektor (DJ) and Stefan Hinz (Live)

More acts will be announced in the coming weeks.

A LEAF Tobacco Dock combination wristband can be purchased for the conference, live gig and club element.