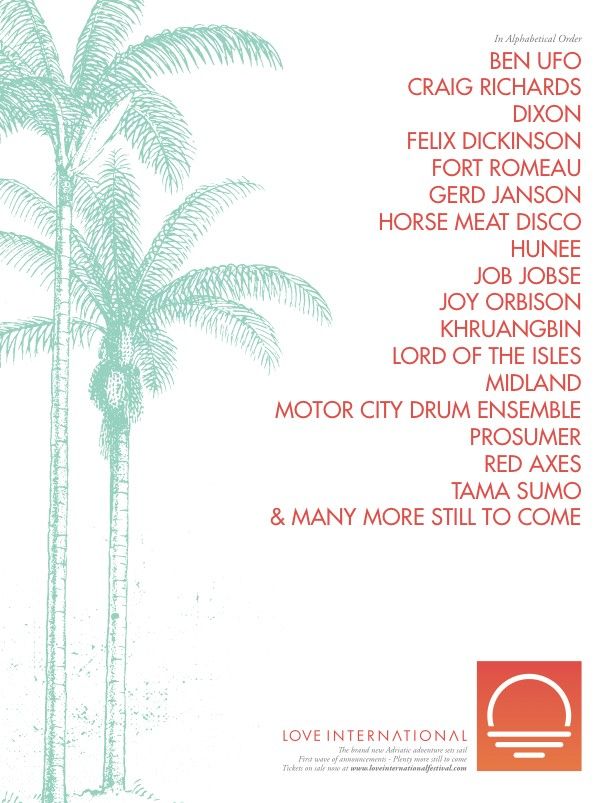 Love International is the spiritual successor of the acclaimed original Croatian odyssey, The Garden Festival, and seeks to build upon the decade’s worth of magic created already in the region. By day a harmonious holiday beneath the sizzling sun, and by dusk as the beats shift gear and introduce each balmy night beneath a canopy of stars, the intimate setting holds a unique energy, sound tracked by some of the world’s leading underground DJs and producers, drawing a vibrant and diverse audience from across the world to this tiny strip of paradise.

Dave Harvey, one of Love International’s founders, explains that: “We are feeling really great about Love International and continuing the great work The Garden Festival family created here over the last ten years. What we are doing is going to have its own vibe and some new elements, but at the same time we are seeking to retain and embrace what made The Garden so good – that family feel to it all, everyone knowing everyone else, all set in this incredible site on the coast. For us it’s about continuing that growth in our own way, so people who came to The Garden will find Love International familiar to them, but at the same time it will be a new experience. We feel we have got some great names onboard for our first announcement, with loads more to come in January.”

Dixon is one the esteemed Innervisions’ lynchpins and cited as one of electronic music’s most important DJs and producers, whilst Motor City Drum Ensemble is master crafter of good times house music in his expertly curated sets. Hessle Audio’s leading exponent of electronica, Ben UFO, makes a very welcome return to Croatia, whilst Gerd Janson is the Running Back boss now getting the attention he deserves; the esteemed Robert Johnson resident is fast becoming the toast of the underground and has had a stellar year. Craig Richards is Fabric’s music director and esteemed resident since day one at the iconic club, Joy Orbison brings heads down bangers to Love International, Midland is a Tisno fave whose extended sets are the stuff of legend and Croatia regulars and outstanding house and disco purveyors Horse Meat Disco bring their own party mayhem.

Prosumer is a mercurial master behind the decks, whilst Hunee – one of the year’s biggest stars – segues all kinds of genres across his scintillating sets. Panorama Bar resident and house music master Tama Sumo is joined by Job Jobse who shone at Barbarella’s at the final Garden Festival, classic house music revitalist and acclaimed forward-thinker Fort Romeau, and Felix Dickinson, having recently played at Fabric’s 16th birthday, has been rocking the Croatian coast for years. Red Axes – aka Dori Sadovnik and Niv Arzi – bring their underground psychedelic electronic sounds, whilst enigmatic Scottish producer and DJ Lord Of The Isles and Texan Thai-funk pioneers Khruangbin bring a new dimension to Love International.

The Garden Tisno site is blessed with natural beauty at every turn, hemmed in by walls of towering pines; from the gently curving beach lapped by crystal clear Adriatic waters with the pulsating Beach Bar and Funktion One sound on one side to watching the legendary old sea-dog The Argonaughty dock on the other; from the Olive Stage hidden beneath a canopy of trees, following winding paths and chill out zones, with many bars and places to eat, to a little higher up where the Main Stage dominates for amazing live shows and headline DJ sets. Higher still there is the restaurant and guest DJs dropping in to spin throughout the day, and entrancing views across the bay. And many people’s favourite place, Barbarella’s, is nestled just a few miles away; a fully open air club which is now regarded as one of the best in the world, a simply breath-taking place to party from midnight and see the sun’s rise at dawn, breaking over the ridge of pine trees which surround it. Every DJ who has played here says it is one of the most amazing settings they have experienced.

Many more names will be announced in the New Year, along with boat and club parties and exciting new elements to Love International.