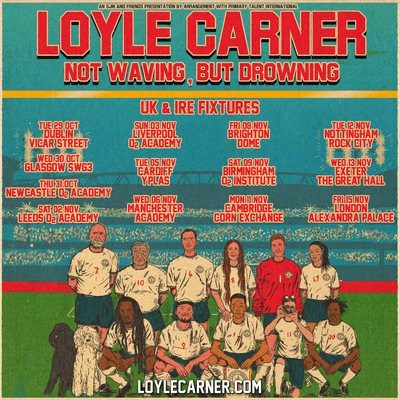 by ihouseuadmin
0 comments
Not Waving, But Drowning
“Loyle Carner’s Not Waving, But Drowning is a bold, uncompromising step forward” – The Line of Best Fit 9*
“an unforced gem of British hop hop-soul” – ipaper 4*
“Threading all together is graceful jazz/soul music, some terrific guest vocalists and poetic, fluid delivery” – Irish Times 4*
“Not Waving, But Drowning has an emotional intelligence that shows just how strong Carner is when he’s at his most vulnerable” – Independent 4*
“An hurried stride and considerable lyricism” – FT 4*
“Minimalist sophistication” – The Times 4*
“Utterly heartfelt and intimate” – The Guardian
“Another compellingly intimate listen” – Uncut
“‘Not Waving, But Drowning’ is an impressive second album” – NME
“Loyle’s music is real and resonates with listeners” –London In Stereo
“a rapper who refuses to compromise his sound to chase UK trends” – Noisey
“Always heartfelt and often deeply personal, Carner’s brand of rap feels mature in its emotional outlook as well as its golden-era influences” – FADER
Loyle Carner is back with the announcement of his largest UK tour to date including a performance at London’s prestigious Alexandra Palace. News of the forthcoming tour follows his career defining set at this yearsGlastonbury Festival, where he played to an adoring audience of festival goers as the sun went down on The Other Stage.
Loyle Carner released his sophomore album Not Waving, But Drowning earlier this year to huge critical and commercial acclaim; the album charted at #3 in the UK Charts. This follows the wild acclaim of his debut albumYesterday’s Gone, which saw Loyle nominated for ‘Best Newcomer’ and ‘Best Male’ gongs at the BRIT Awards alongside a Mercury Prize nomination for his debut album. Loyle’s pre-album tour (including a headline show at The Roundhouse) sold out in 5 minutes, solidifying his reputation as one of the most exciting musicians in the UK at the moment.
LIVE DATES
29 October – Dublin, Vicar Street
30 October – Glasgow, SW63
31 October – Newcastle, Newcastle O2 Academy
2 November – Leeds, Leeds O2 Academy
3 November – Liverpool, Liverpool O2 Academy
5 November – Cardiff, Y Plas
6 November – Manchester, Manchester Academy
8 November – Brighton, Brighton Dome
9 November – Birmingham, The O2 Institute
11 November – Cambridge, The Corn Exchange
12 November – Nottingham, Rock City
13 November – Exeter, The Great Hall
15 November – London, Alexandra Palace
loylecarner.com