Made Festival Announces Massive After Party At Lab 11 Birmingham 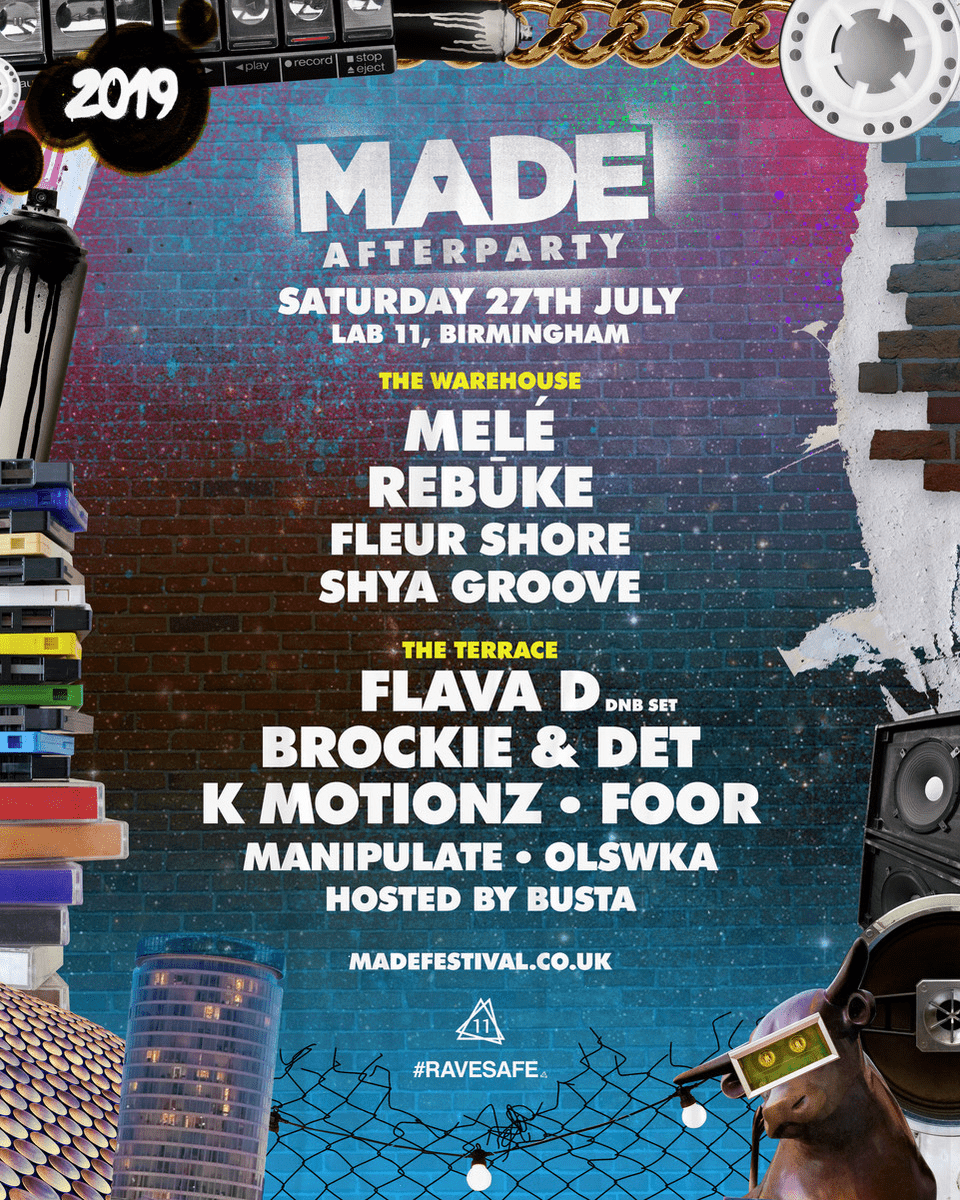 Made Festival Announces Massive After Party At Lab 11 Birmingham

by ihouseuadmin
0 comments
MADE Festival finishes at 10pm but the party continues at one of Birmingham’s best underground venues, Lab 11 in Digbeth, with two rooms split between house and bass music. The MADE Festival after party 2019 will celebrate another year of the West Midland’s biggest festival. The after party is a separate ticketed event from 11pm to 6am on Saturday 27th July.
MADE Festival has announced a massive after party to give festival-goers the chance to carryon the party and celebrate another year of MADE in Perry Park.
This year the MADE after party will land at one of Birmingham’s best underground venues, Lab 11 on Saturday 27th July. Across two rooms, the after hours goodness, will be split between house and bass music with Melé, Rebuke, Fleur Shore and Shya Groove in the Warehouse, and on The Terrace, Flava D (DnB set), DJ Brockie & MC Det, K Motionz, FooR, Manipulate / Olskwa, hosted by MC Busta DNB. For the true party people, the MADE Festival vibe is guaranteed to keep rolling until the early hours. The after party is a separate ticketed event, taking place from 11pm to 6am, with buses available to take guests from Perry Park to follow the music. Tickets cost from just £17.50 + b/f with bus tickets from the festival site for £4 at: www.made-festival.co.uk.
Liverpool’s finest, Melé headlines the Warehouse room. The DJ and producer is hugely respected, underlined by his recent invite to take over the esteemed BBC Radio 1 Essential Mix. His ability to mix party-fuelled anthems with underground cuts has seen him in high demand, touring the world, tearing up clubs and festivals. He delivered an ‘In The House’ compilation, one of the Defected Records legendary series, and boasts a sound all of his own, meshing world music-influenced house, transatlantic hip-hop, broader UK sounds and classic Chicago grooves. There’s no one better to kick off an after-party. Fast-rising star Rebuke will bring his unique soundclash of house, techno and rave to proceedings, while local heroes Fleur Shore and Shya Groove will be determined to make their mark on the after party.
On The Terrace, Bournemouth’s prize DJ, Flava D will step up for a special Drum & Bass set. One third of the massive TQD collective, Flava D is more than capable of taking the reins solo, as proven by a packed schedule which has taken her across the UK, the USA and back again. Her recent signing to Hospital Records shows the kind of respect she has earned over the past few years. DJ Brockie is one of the original jungle DJs and his influential journey continues stronger than ever, with the unrivalled MC Set on the mic for the afters. Also on the decks is 19 year old K Motionz, another Birmingham-based talent fast making a name in the drum & bass scene. Championed by Mistajam and DJ Target, FooR will hit the after-party with some garage and bassline flavours. More Midlands D ’n’ B favourites line up with Manipulate / Olskwa, with the whole shebang hosted by the one and only MC Busta.
The after party takes over one of Birmingham’s great venues and is only approximately 10 minutes drive from the main MADE Festival site in Perry Park. There’s no excuse not to keep the fun going with some serious MADE Festival after party action.
Tickets for MADE Festival and MADE Festival After Party are available separately from www.made-festival.co.uk.