MADE Festival Has Announced It Will Offer Drug Safety Testing And Counselling On-site As Part Of A New Harm Reduction Strategy. 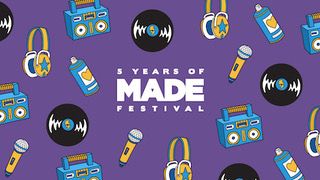 MADE Festival Has Announced It Will Offer Drug Safety Testing And Counselling On-site As Part Of A New Harm Reduction Strategy.

The Birmingham festival, which takes place on 28th July, operates a strict no drugs policy and does not condone illegal drug use, but will introduce Multi Agency Safety Testing (MAST) as part of its new harm reduction strategy, allowing festival-goers to test drugs and make informed choices; the first time such safety testing has been used in the West Midlands. The decision to use MAST is the result of a new partnership between The Loop, a non profit social enterprise specialising in drug safety testing, West Midlands Police, the Police and Crime Commissioner and Birmingham City Council.

MADE Festival has announced it will introduce the on-site drug safety testing and counselling service provided by The Loop, a non profit social enterprise, at this year’s event, which takes place on 28th July. MADE Festival operates a strict no drugs policy and maintains its strong stance against the use of illegal drugs. Organisers are clear that festival-goers should not try to bring any such substances to Perry Park in Birmingham, MADE Festival’s new home, as it celebrates its fifth year as the West Midlands’ biggest music and arts festival. However, following recommendations from the West Midlands Police and Crime Commissioner, MADE will implement Multi Agency Safety Testing (MAST); the first time such safety testing has been used in the West Midlands. This is an innovative, free and confidential service that will be integral to MADE Festival’s harm reduction strategy, allowing festival-goers to bring substances of concern to The Loop’s tent for forensic analysis and test results delivered by healthcare professionals to help them make informed choices about their use.

Pete Jordan, MADE Festival’s Festival Director said,
“As Birmingham’s leading music festival, the safety of our customers is our top priority. We are pleased to be working in collaboration with The Loop, West Midlands Police, the Police and Crime Commissioner and Birmingham City Council to create a safe and enjoyable experience for all who attend. MADE Festival maintains its anti-drug stance, and we strongly urge people not to bring illegal substances to the event.”

The Loop has worked successfully with a number of festivals over the last five years in helping to introduce an approach focused on harm reduction. Their on-site team will also provide a counselling and support service for anyone who may be experiencing problems as a result of drug or alcohol use.

“The Loop will be delivering our drug safety testing service at over ten festivals across the UK this summer so we have a growing understanding of what is circulating in the illegal drug market, what is missold and what the risks might be. It is vitally important that we test in the Midlands and collect test data to inform not just festival-goers but also onsite and off site emergency services so everyone knows what is in circulation. We are delighted to be in the UK’s second city for the first time, with such strong support from the partner agencies who invited us here.”

The Loop’s MAST service is a form of drug safety testing whereby individual users submit samples for analysis and receive their results as part of a confidential, individually tailored harm reduction package, which facilitates a direct dialogue between the customer and The Loop’s specialist harm reduction team. This results in a greater understanding of the drugs that may be taken and subsequently a much-reduced risk of harm.

“I support drug safety testing because it can prevent deaths of young people from harmful substances. Also it can reduce the cost to public services of drug taking. Drugs are extremely dangerous and people always put themselves at risk when they consume them. I do not condone drug use, but we need to be realistic that a minority of young people are using drugs despite the risks. Safety testing can actually reduce the number of drugs that are used at an event. It is not uncommon for festival-goers to voluntarily dispose of their drugs after safety testing reveals what they are composed of. Safety testing is an evidence based idea that has worked elsewhere in the country to reduce harm and alleviate demand on emergency services.

“If we are to cut crime and save lives there’s one thing we can all agree on; we need fresh ideas. Beyond our moral duty to protect life, the potential savings for public services and in turn the taxpayer, could be vast if just one serious overdose is prevented. Safety testing also helps the police to gather intelligence on new drugs in the region. That intelligence can then be used to warn people of the dangers around these substances, and to prosecute the dealers who are putting profit above young people’s lives.

“I would like to thank MADE Festival for the bold step they have taken and The Loop for delivering this initiative. Too many young lives are being lost in the country. I want us to find new ways to protect those young people.”
Superintendent Jane Bailey, West Midlands Police force lead for drugs and psychoactive substances, comments,

“We work hard to tackle the distribution of drugs and the harm they cause to our communities. While we continue to target dealers, we recognise that – despite the law – there will be festival goers who make a choice to take drugs. The drugs safety testing is part of a Harm Reduction Strategy pilot, intended to reduce the likelihood of drug-related overdose and drug-related death.

“We can never condone the use of illegal drugs and there is a ‘no drugs policy’ in place at the venue of the festival; but despite this we recognise that some people will continue to take them and we need to adapt our approach to reduce the likelihood of serious harm in these circumstances.

“The safety testing of drugs is a first for the West Midlands and I‘m keen to see how the intervention will provide help for those who need it, and enable an early alert to go out to other potential drug users if drugs tested are found to be a potent mix that will cause serious illness or worse. It will also help broaden our understanding of what drugs are being used in circulation locally and where they may be coming from, but we will not become complacent; taking any illegal drug is dangerous and cannot be assumed to be safe. Taking drugs and/or being involved in drug crime can have devastating consequences, not just for the individual but for their families and loved ones. Sadly this is often seen with drug-related overdoses, deaths and violence. The purpose of this pilot is to reduce such incidents and provide access to drugs support professionals for those who may require it.

“We remain absolutely committed to tackling the illegal distribution of drugs on our streets and will always seek to prosecute those involved in the supply of drugs and associated crimes. They are harmful to our communities and drive serious acquisitive crime.

“Gaining a better understanding of those choosing to take drugs at a festival can only help in our fight against drug crime. Those who wish to get their drugs tested can do so in a place where there are trained healthcare professionals on standby to offer support and advice. Meanwhile we’ll have access to all the substances which are tested during the day which can then be destroyed, or disposed of safely.

“We will work closely with the on-site security team on the day to target the possession and supply of controlled drugs and the criminal law will be applied appropriately as necessary. I’d urge anyone who is worried about the illegal supply of drugs to call police on 101 or call Crimestoppers anonymously on 0800 555 111."

Councillor Tristan Chatfield, Cabinet Member for Social Inclusion, Community Safety and Equalities at Birmingham City Council, said,
“We are clear that illegal drugs have no place in our city. They are a blight on our communities, causing untold harm not just to users, but also to families and neighbourhoods impacted by the wider criminal activity associated with the drugs trade.

“While I would urge festival-goers not to attempt to bring illegal drugs on-site, I would welcome any measures which will help to make the festival experience as safe as possible for those attending.”
Following four years of consecutively sold out events, MADE Festival returns with a huge lineup at its new home in Perry Park, including Dizzee Rascal, DJ EZ, Kurupt FM, Andy C, DJ Q, Chris Lorenzo, Camelphat and many more. As one of the biggest supporters of music, creativity and street culture in the West Midlands, MADE Festival has become an integral part of the area’s diverse cultural landscape over the last five years. Today’s announcement is another positive step to ensure the safest possible environment for festival-goers to enjoy the biggest and most impressive event of its kind in the region.
The last remaining tickets to MADE Festival are available from £47.50 + b/f from www.made-festival.co.uk