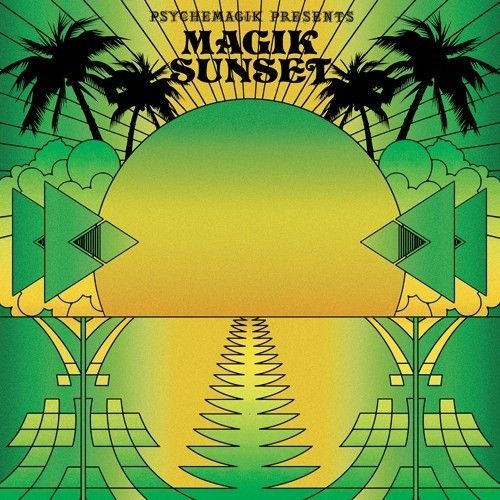 Psychemagik are big time record collectors with Danny McLewin being one of the deepest collectors around. Here is the second part of the long anticipated follow up to Psychemagik’s Magik Cyrkles and Magik Sunrise compilations, out on Leng Records. The UK duo, known for their beautiful production work, prolific remixing skills, obscenely vast record collections and transcendent mixtape journeys, have been heralded as a truly unique and positive presence across today’s music scenes.

They have developed a reputation as the go to guys for mega rare records and samples that you can’t and won’t find anywhere else. Their satisfied customers include 2 Many Dj’s/Soulwax, Chemical Brothers, Q-Tip and Fake Blood amongst many others. It is this incredible ear for musical treasures and their dedication to the art of digging that has led to the success of their recent compilations, all of which have featured in the End of Year Top 10’s at most good record shops globally including Rough Trade, Phonica and Piccadilly Records. The most recent in this series, ‘Magik Sunset Part One’, was recently released and lauded compilation of the week on Lauren Laverne’s BBC 6 Music show.

The follow up and final part of the series, ‘Magik Sunset Part Two’ is yet another fine selection of tracks mainly released in extremely small numbers, sometimes only on private presses and only reaching specific parts of the world.  Many of the tracks offered little information when searching for the original artists, some were discovered living in remote parts of the US and some had changed their names making the search that bit harder. This long and difficult search took well over a year but at the end of it there was more than enough music to make the album into a two-part finale of the Magik series.

As the compiler, Danny McLewin of Psychemagik says; “We accidentally ended up with such a positive response that we were left with almost too much quality to cater for one double LP. We ended up with the format being expanded to a feast worthy of two editions of double vinyl if only as a respectful nod to the incredible tunes and vibrations being realised, the project simply evolved into two volumes.”

So here we have Part Two, another selection that ranges through the 70’s and 80’s covering soul, funk, disco and folk, one that would cost you thousands if you were able to find the original releases yourself. As with previous albums all tracks have been mastered from original vinyl to get the best possible sound reproduction.

‘Magik Sunset Part Two’ will be released on gatefold double LP and Double CD + Digital. Part One is out now and Part Two will be released on September 4th 2015.  As with previous Magik compilations, the gatefold includes some fascinating insights from the original artists, explaining how their life was back when they were writing and recording their respective songs which have been lovingly restored and made ripe for today’s discerning dance fan.

FURTHER INFORMATION FROM LENG LABEL BOSS SIMON PURNELL:
“Psychemagik had been making a name for themselves for a while before they approached us to do a compilation on Leng back in 2012 and it was important to them and us that we do it right and we find all the artists no matter how hard it was or how long it took.

Danny supplied us with a load of tracks they felt would be good for the album, we as a label went through them all saying which we liked and weren’t so keen on and ending up putting it into some kind of context. While all this was happening I started searching for the artists which was the major aspect of this project.

The first album, ‘Magik Cyrkles’ was relatively easy (relative to what was to come in future albums) and didn’t take so long to find everyone. It still took me all across the globe and back again, sometimes searching across the States for some old funk track that I ended up finding the owner living in Colchester.

This first album was pretty wild and received a really good response so when it was agreed we’d embark on another album the approach was going to be all together more Balearic in style with Danny really digging deep and taking the selections into a different direction.

The result was ‘Magik Sunrise’ which received a phenomenal response from punters and record shops alike. Piccadilly Records voted it their Best Compilation of 2013 which we were extremely chuffed about. Again, the search for the artists took me all over the world (not in the literal sense unfortunately) with some being found in Canada, USA, Germany, France, Spain, Hawaii and just off the Portobello Road in London. One person had also changed their named making the search for them that little bit harder!

So after the success of Sunrise we felt there was a final chapter in the Magik series to discover and it had to be a natural successor to what had gone before. ‘Magik Sunset’ started off as being a single album but as usual Danny delivered too many amazing records and after the responses we got from many of the artists and the fact we had found more of them than we had expected we realised we had enough for two parts of the final album. The search for these artists was longer and a much more difficult task for me as there were tracks with literally no information available on them. Sometimes only a name on a 7” that came out in 1973 on a private press that most likely didn’t get much further than the artists hometown.

Tracking down all of these artists for Sunset Part One and Two took the best part of two years with each one having a story about how they were found. Many of the artists are still recording, but some are in completely unrelated careers these days, but most haven’t even thought about the track I’m reminding them of for the last 40 years or so.

So really this series has been an amazing collaboration between us the label and Psychemagik the compilers. They’ve selected some amazing music and we’ve searched for the artists which ends when it ends. No release schedule applied, it’s just ready when it’s ready. Some of the tracks have been edited by Psychemagik but that’s only for some that needed a little tweak for the dancefloor or those that had an amazing instrumental to cut between. Most have been presented in their original arrangement.

All four albums are full of amazing tracks that you would be unlikely to come across anywhere else and would cost you thousands if you were to find the original vinyl yourself.