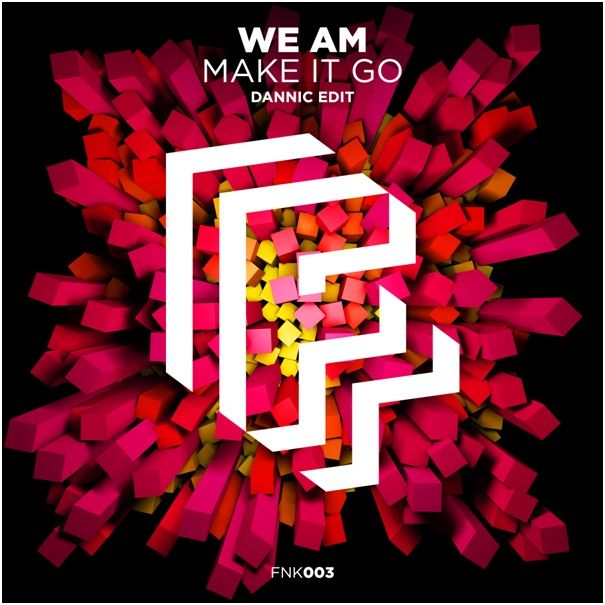 Dannic returns to his very own imprint Fonk Recordings, releasing his highly anticipated edit of We AM’s ‘Make It Go’. Since exploding onto the scene, Dannic has projected himself up through the Dance music ladder at rapid pace; establishing himself as one of the globe’s finest craftsmen. Currently ranked #26 in the DJMag Top 100 DJs chart, Dannic is responsible for hit singles such as ‘Radical’, ‘Survivors’ and ‘Dear Life’, collaborating with the likes of Hardwell, Dyro, and remixing Armin van Buuren and R3hab along the way – achievements many can only dream of.

Teaming up with Dannic for ‘Make It Go’ are rising stars We AM. Hailing from Bern, Switzerland, Alex and Manuel, the two talents behind the We AM moniker, have cemented their place as one of the scene’s fastest rising duos, thanks to their unique studio productions. Already gaining support from A-List DJs such as: Sidney Samson, Kill The Buzz, Danny Avila, Lucky Date and Juicy M, 2016 looks set to be a standout year for the multi-talented Swiss pair.

‘Make It Go’ certainly brings the funk to Fonk. With bouncy razor sharp synths, heavy drums, vast amounts of groove and drops that unleash plenty of energetic waves, ‘Make It Go’ contains the perfect blend of Dannic’s trademark sound and We AM’s groovy style. The breakdown will certainly make the hairs on your arms stand, thanks to the emotional, euphoric chords and intricate sound design – a must for any DJ’s record collection.

11th April is the release date for this Electro infused Progressive thriller, which will be released via Dannic’s own Fonk Recordings. Despite only launching in October 2015, the label has already established itself as one of the industry’s most exciting, emerging new imprints and boasts a stellar roster that includes artists such as: Dannic, HIIO, M35 and Vion Konger – an impressive roster for a relatively new brand. Already a firm favourite in Hardwell, Dannic and Kill The Buzz’s DJ sets, ‘Make It Go’ is sure to be one of the most talked about tracks of 2016.