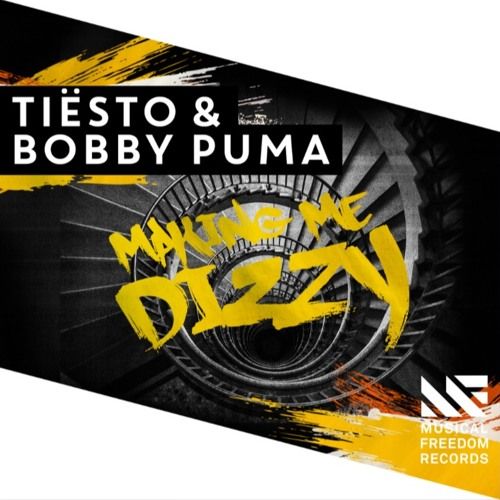 Coming together on an energy infused scorcher, Tiësto and Bobby Puma join forces for “Making Me Dizzy,” out now via Musical Freedom Records. With high energy vocals leading the way, the track pays homage to classic house influences while maintaining a modern sound that stays true to both artist’s styles. Infused with whirling instrumentals, and spinning synths “Making Me Dizzy” lives up to its’ name, packing a punch from start to finish.

As one of the top dance music acts in the world, Grammy award winning icon, Tiësto, needs no introduction. Revered for his live shows as well as for his production and remix work, Tiësto is a globally celebrated DJ that has been named “The Greatest DJ of All Time” by Mixmag and the #1 DJ by Rolling Stone. With a remarkable career spanning over 20 years, Tiësto’s versatility has become part of his calling card. In the past year his album, A Town Called Paradise, yielded 2 gold singles “Red Lights” and “Wasted,” he won a Grammy for his remix of John Legend’s “All of Me,” and he hosted the online video series, “Your Shot USA.” In recent months, he received the Edison Pop Oeuvre Lifetime Achievement Award, released the chart topping single “The Right Song” with Oliver Heldens feat. Natalie La Rose, and launched his new top rated music app. The app is now the only place fans can tune into the 2nd hour of his weekly Club Life podcasts.

Bay area native, Bobby Puma, has been one of the top producers for the past five years and one of the most underrated. Until recently, he has been so inundated with projects he did not have a chance to showcase his DJ abilities. In the spring of 2015, he finally got the opportunity. Bobby headlined a 29-date North American tour where he unleashed an arsenal of great club tracks. A frequenter in the Beatport charts, Puma’s top rankings include his breakout hit “Jump,” his first collaboration with Chuckie “Mainstage,” as well as two releases on Doorn Records “Rockin’ with the Best” and “Manifesto.” No stranger to his work, Tiësto put his own signature touch on Puma’s track “Someone Somewhere.” Having already released “Deeper Than Love” on Armada Music earlier this year, Puma is just revving up to make a big leap in 2016.