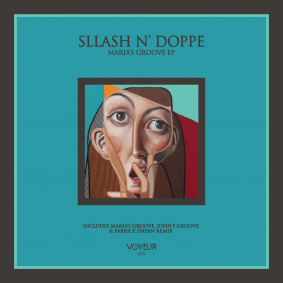 After more than 10 years of collaboration and house music floor fillers, the renowned Romanian duo Sllash N’ Doppe enter the Voyeur roster with a pair of undeniably strong tracks that come with a remix from label boss Fabrice Dayan.

Sllash N’ Doppe have previously released on the likes of Great Stuff Recordings and Glasgow Underground turning out hits that have shot to the top of club charts and become huge in Ibiza. With early support on this new release from the likes of Solomun, this EP has been in hot demand for many months.

It’s easy to see why, as ‘Maria’s Groove’ is a playful tune with a killer gypsy vocal and well swung drums. It’s laced with accordion and has an off-kilter groove that will bring out the wild side in any crowd. Then comes a massive big room remix from French artist Fabrice Dayan, it’s tainted with a deep Balkan vibe and tailor made to be an outdoor party anthem.

The EP also contains ‘John’s Groove,’ which already appears on the bestselling summer album Nassau Ibiza Album 2018. This one is deeper and more driving than the other original with warm chords and flute sounds oiling the groove and getting you under its curious and charismatic spell.

These are three fun and inventive tunes that are prime for summer.