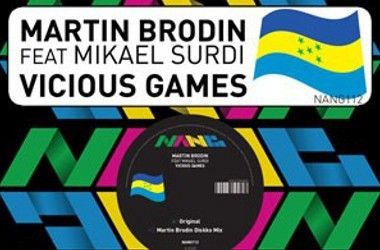 Martin Brodin is set to release a brand new EP titled ‘Vicious Games’ (a cover of the ’85 hit by Yello) on Nang this Summer after a brace of successful remixes for the label. Brodin, from Sweden, rose to prominence back in 2011 when he was asked to remix Sky by The Human League, which was released on Wall Of Sound. He then went on to remix the legendary Giorgio Moroder and his classic record ‘The Chase’ from 1978.

Over the years Brodin’s music has been personally selected for compilations by the likes of Claude VonStroke, Ben Watt, Carl Cox and Nick Warren. The producer started his MB Disco label in the fall of 2010 as an outlet for his music. The feedback from interested collaborators was instant, with releases and remixes from people such as Ilija Rudman, Ray Mang, Chicken Lips and Drop Out Orchestra. He continues to take his eclectic DJ styles as far as Tokyo, Dubai, Zurich, Kiev, Copenhagen and London.

‘Vicious Games’ is an electro-tinged synthpop stomper of a cover of the 1985 hit by Yello. It features heavy house beats and a bold vocal from club singer Mikael Surdi to create an unique cover song that works perfectly on the floor. The ‘Diskko Mix’ is a little more slinky, less heavy on the lead synth, with a focus on the euphoric twilight energy of Nu-disco.

Burnin Tears bring out the cosmic pads for their interpretation, with a rolling arpeggio and wispy vocal extracts. To finish the package, A Tufty Club take things down a moody acidic path, with a slo-mo 303 bass pattern, a broken house beat and a bath of atmospheric effects. Nice.