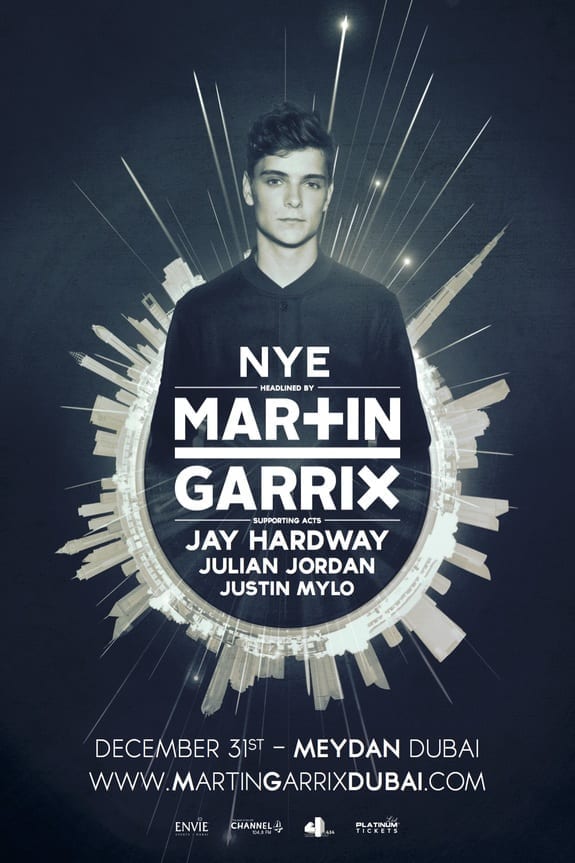 With the end of the year fast approaching, attention turns towards what is undoubtedly one of the most important dates in the party calendar. Ensuring that he ends his year with the epic celebration that it has warranted, the world’s #3 DJ Martin Garrix is gearing up for an incredible party at Meydan Ampitheatre in Dubai this New Year’s Eve.

A farewell to yet another unbelievable year for the Dutch phenomenon, Garrix has announced that he will be treating his fans to an enormous 3-hour set, showcasing his inimitable style and showing attendees just why he was recently awarded Best Electronic Artist at the MTV EMAs. As if this wasn’t enough, Martin has carefully selected an elite lineup of home-grown talent to join him on the night, with Jay Hardway, Julian Jordan and Justin Mylo all confirmed to play.

Teaming up with Envie Events, Martin Garrix is pulling out all the stops to make his show-stopping return to Dubai and host the most sensational New Year’s Eve event the city, if not world, has to offer. Taking place at the world famous Meydan Ampitheatre, this impressive venue boasts a beautiful view of the Dubai skyline and will include a stunning, vibrant lightshow provided by A&O technology with Falcon lights to make the grounds come alive. On top of this, at midnight all eyes will turn to the Downtown Dubai skyline where fans will be well and truly spoilt with a panoramic view of the breathtaking Burj Khalifa fireworks displays. With over one and a half million tourists estimated to have flocked to the world’s tallest building last New Year’s Eve for this record-breaking firework show, lucky party goers will be able to enjoy the illuminations without the crowds.

Dubai has built a reputation for doing everything bigger and better than anywhere else – from laying claim to the tallest skyscraper down to throwing the best parties on the planet – it’s clear why it has become the fourth most visited city in the world. A city that revels in its opulence and never settles for anything less than the very best, attendees can be sure that every aspect of production has been fine tuned to ensure a mind-blowing experience and unforgettable way to ring in 2016