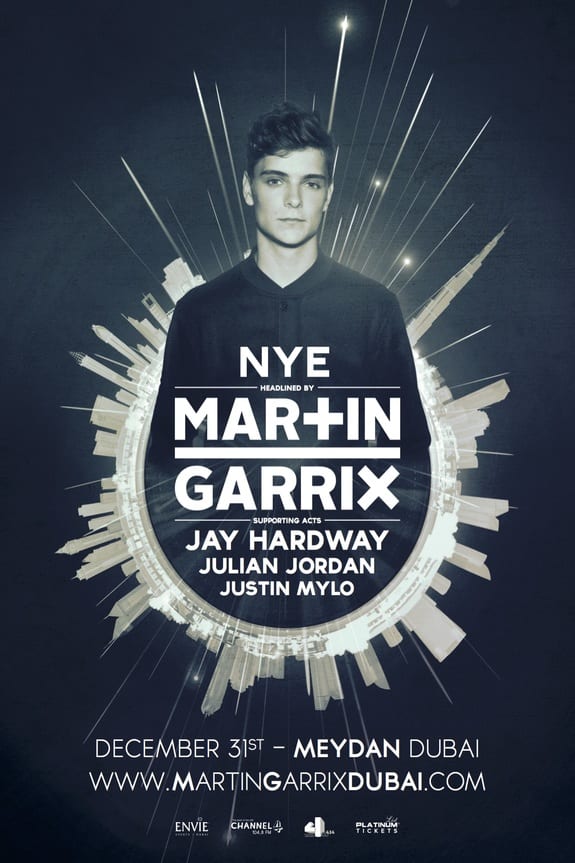 International dance music superstar, Martin Garrix has announced a stellar cast of supporting acts set to join him for his incredible New Year’s Eve show at the famous Meydan Amphitheatre in Dubai. Recently voted the world’s #3 DJ Garrix has chosen home-grown talents Jay Hardway, Julian Jordan and Justin Mylo to perform alongside him at this soon-to-be sell out event.

Recently picking up the award for Best Electronic Artist at the MTV EMAs, Garrix will be ending what has been yet another outstanding year, at the ultimate party to ring in 2016. Showcasing his unique and energetic style of dance music, for which he has won the loyal support of fans worldwide, it is easy to see why tickets for this event are getting snapped up quickly, with Tier 1 GA tickets selling out in record time. Second tier are now available at AED 350.

Carefully selecting an impeccable lineup of the Netherlands’ finest acts, first to be added, Jay Hardway has long since been a favourite of Garrix, having collaborated with the Dutch sensation for many years, producing huge hits such as ‘Error 404’ and ‘Wizard’. Considering Hardway’s recent solo success with ‘Bootcamp’ as well, you can be sure that this addition to the line up is going to impress. Another collaborator and good friend of Martin’s, having worked together to bring fans music such as ‘BFM’ and more recent solo tracks such as ‘The Takedown’, Julian Jordan is sure to prove a popular addition. New kid on the block, Justin Mylo, is not one to be overlooked. Having already appeared with Garrix at super festival Tomorrowland and joined forces with him on ‘Bouncy Boy’, it’s clear this is another artist to watch.

Having only performed in Dubai once before at the first exclusive open-air edition of Sensation, Martin Garrix and Envie Events are pulling out all the stops to ensure his NYE return will be yet another show-stopping event. Set in one of Dubai’s most spectacular venues, the Meydan Amphitheatre is the perfect place to see in the New Year. A direct view of the world’s largest fireworks display from the towering Burj Khalifa, against a backdrop of Dubai’s impressive, sparkling skyline are just some of the things that make this venue unrivalled when it comes to New Year’s Eve celebrations.

GA tickets include a dedicated F&B village that will have a seating area, multiple bar outlets and additional food court kiosks to ensure a hassle-free New Year’s Eve for the fans. All that, combined with ample parking and easy access, means that Meydan Dubai is the go-to venue for the New Year in Dubai.

Deluxe tickets give you exclusive access to a fabulous designated elevated deck including a fully-serviced open bar and private VIP food stations.

Those wishing to start the New Year in style can make an exclusive booking at the luxurious ‘VIP Table Deck,’ which features fully-serviced private tables with a terrace overlooking the city’s skyline and breathtaking fireworks. This purpose-built area can accommodate around 1000 people. Contact [email protected] or +971558759254