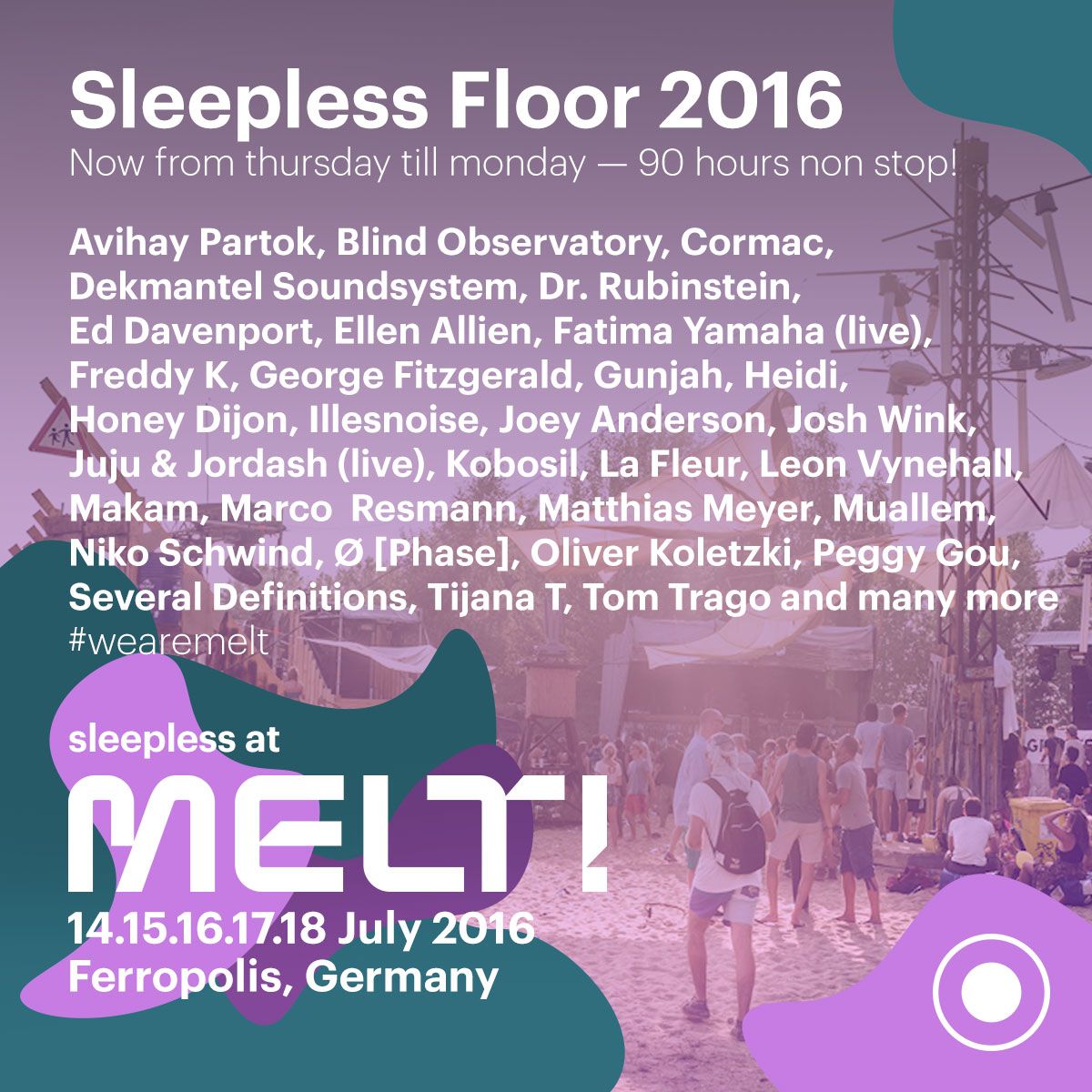 Melt!, Germany’s premier festival taking place in the City of Iron, Ferropolis, announces the line up for its Sleepless Floor. For the first time in the festival’s history, the famous Sleepless Floor will run for 90 continuous hours over the duration festival and will welcome artists including Ellen Allien, Fatima Yamaha (live), Leon Vynehall, Josh Wink, George Fitzgerald, Joey Anderson and more.

Breaking away from tradition – which has previously seen the open-air stage open on Saturday morning – the Sleepless Floor will open on Thursday evening this year, continuing all the way through to Monday morning.

Extended hours have by no means resulted in compromised line-up quality, with a huge selection of artists featuring on the back-to-back billing. Opening the first ever Sleepless Floor pre-party on Thursday at 6pm will be Oliver Koletzki and his Stil vor Talent label mates Niko Schwind, Illesnoise and Several Definitions.

Joining the already-announced Honey Dijon, Tijana T and Ed Davenport on Friday night will be Canadian DJ Heidi and Israel’s Avihay Partok. George Fitzgerald and Josh Wink will make a welcome return to the stage, followed by a 12-hour dance adventure with the Dekmantel crew: Tom Trago, Fatima Yahama (live), Joey Anderson, Juju & Jordash (live) and Makam, plus the label bosses under the Dekmantel Soundsystem moniker.

Fabric resident Cormac, Leon Vynehall and Ø [Phase] as well as the Bavarian Bob Beaman resident Muallem are also on the billing. Finally, ringing in the final hours of the Sleepless Floor on Monday morning is Melt! favourite and undisputed queen of electro, Ellen Allien.

Melt! festival returns 15 – 17th July 2016 to host its annual non-stop party for a 20,000-strong crowd in the former open-air mining site Ferropolis, two hours South of Berlin. Dubbed the City of Iron thanks to the huge ensemble of behemoth mining cranes and excavators which sit dormant on it, jutting out onto a picturesque lake which festival-goers swim in by day to cool down in the 30 degree heat. By night the majestic mining machines come to life as they are lit up in an array of colours and lasers, providing a truly unique backdrop to the festival.

If a 90-hour party isn’t enough, festival-goers can also hop onto the MiXery Melt! Train, a train which transports revellers to and from the festival, with DJs and a fully loaded bar in the carriages. Departing from Amsterdam for the first time this year, the train goes via Cologne, Hannover, Magdeburg and other cities, taking you straight to the heart of the festival site.

Tickets for this can be purchased in addition to festival tickets, as well as great camping offers, available here: www.meltfestival.de/tickets.