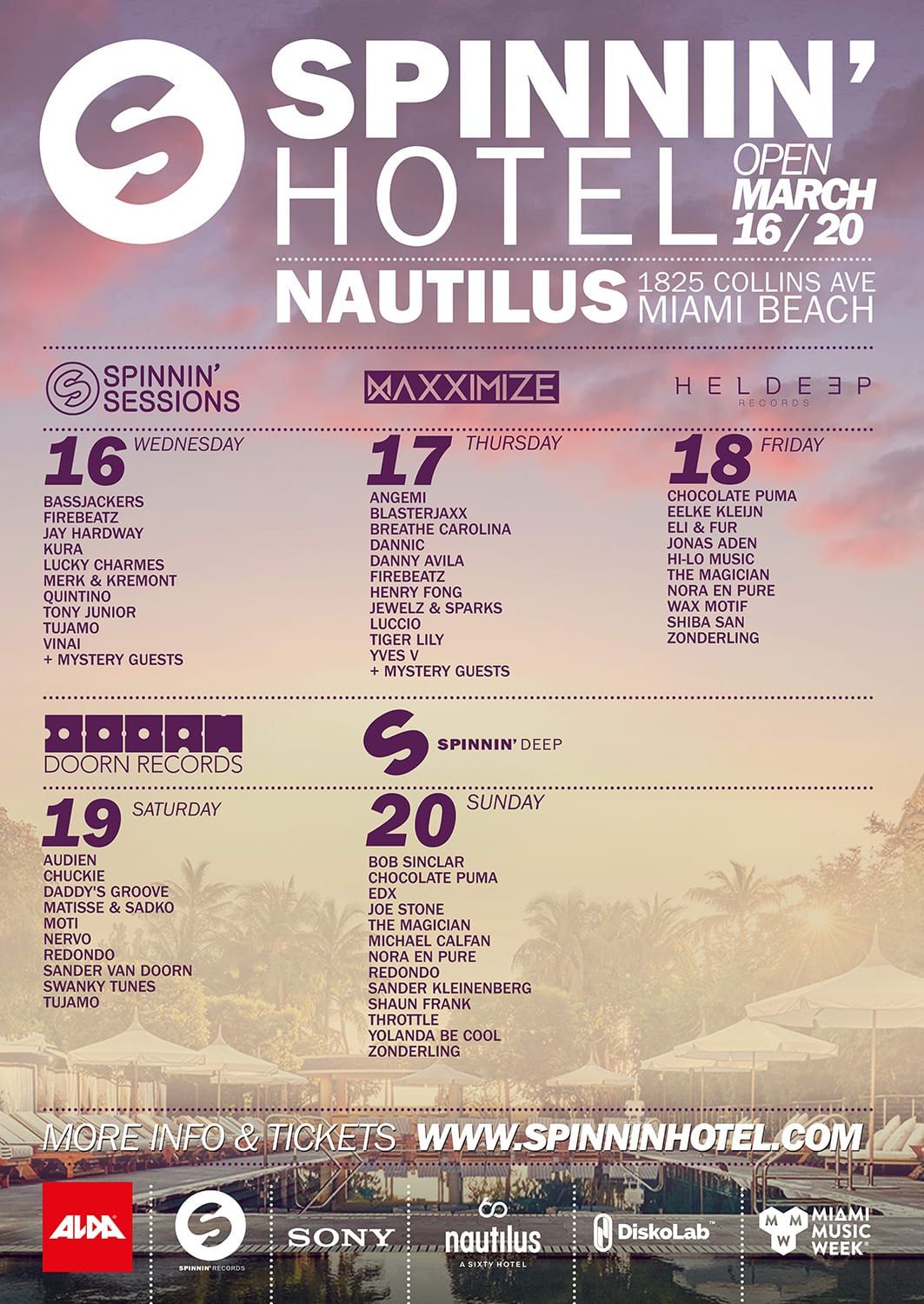 Spinnin' Hotel has added DJs Bob Sinclar and R3hab to the line-up of its five day event Spinnin’ Hotel. Taking place during the Miami Music Week from March 16 to 20, every day of the Spinnin' Hotel will be hosted by another poolparty; Spinnin' Sessions, Maxximize Records, Heldeep Records, DOORN Records and Spinnin' Deep.

Now, most of the performing artists have been revealed, including Bob Sinclar to the Spinnin’ Deep party, while R3hab will join Spinnin’ Sessions next week Wednesday, March 16th.

As world renown dance label Spinnin' Records is gearing up for its fourth consecutive Miami edition, things will be taken to an exciting new level with the launch of the first ever Spinnin' Hotel. Taking place from March 16-20th at the newly opened luxury boutique hotel Nautilus South Beach, beautifully located at 1825 Collins Avenue in the prestigious heart of South Beach, it's set to be one of this year’s most talked about and memorable events of Miami Music Week.

Spinnin’ Sessions
After dates and hosting partners were announced earlier, every event has now revealed most of its line-up. Wednesday March 16th will have Spinnin' Sessions welcome artists like Quintino, Firebeatz and Jay Hardway, and has now added Dutch DJ R3hab to the list. There’s more mystery guests expected as well.

Maxximize
Thursday March 17th the Spinnin' Hotel welcomes none other than Blasterjaxx' label Maxximize Records, including a performance by the Dutch act as well as artists like Breathe Carolina, Danny Avila, Dannic and many more, including exciting mystery guests: youtu.be/AYoBjyGBgZ0

Heldeep
Friday March 18th will be hosted by Heldeep Records, proudly presented by its label boss Oliver Heldens who will perform with his HI-LO project and has also invited DJs like The Magician, Nora En Pure and Chocolate Puma: youtu.be/m45qdRtXFwE

Tickets and Limited VIP Passes are now on sale at spinninhotel.wantickets.com

ALDA Events | www.aldaevents.com | @aldaevents
ALDA Events develops next level technical productions and complete, high-quality event brands from scratch. At ALDA Events we turn the world into a dance floor and create memories that last a lifetime.