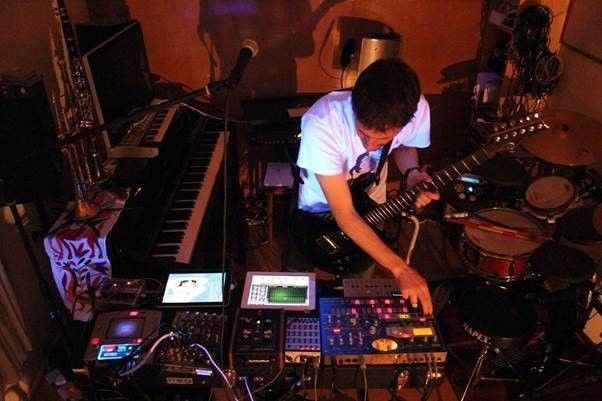 The original ‘Infinite London’ is an ambitious and visceral Electronic track that whips and crunches through exuberant passageways with mischievously dark undercurrent, now given the remix treatment by London’s premiere No Wavers Chik Budo they have taken it apart and created an abstract and twisted Sax fuelled beast of a track.

It is an engaging 1000 loop journey through tunnels of electronic textures that hints at IDM, Chiptune, Glitch and experimental left field electronica that has drawn comparisons to Autechre, Amon Tobin and LCD Soundsystem with influences lying in Mouse on Mars, Cinematic Orchestra and Tricky.

Instead of releasing this music as fixed recording, Forrest composes musical structures in code and chance, creating a listening experience that is different every time. This form of musical expression, never feasible as a release format before the age of smart phones, moves into worlds first explored by Brian Eno and Bjork – Forrest’s work here proves that there is still much to be discovered.

The app itself allows listeners to influence the music, as well as to save and share their favourite moments – moments that would otherwise be lost forever in the infinite possibilities. Anybody who doesn’t have a supported smart phone or tablet can hear one possible route through the album as a 60 minute mix on SoundCloud.

As well as a highly accomplished and innovative musician he is a promoter and very much part of the London experimental electronica circuit and runs SQUARES, which has featured; Max Tundra, Digitonal, Chik Budo, OMMM and Graham Dunning amongst others.