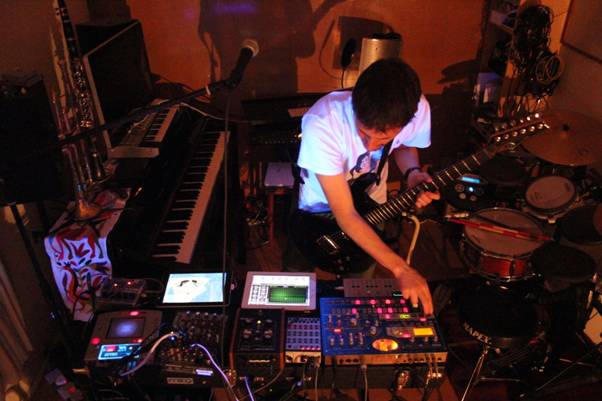 Live music is different every time it is played. A recording, all things being equal, stays the same. What is released has always been fixed in time – three minutes, 45 minutes, two hours, frozen in time forever as a recording or broadcast.  The ‘Infinite Music Machine’ is a software-based music release that sounds different every time it’s played through a smartphone or tablet.  1000 loops were recorded and the App was developed by Forrest that re-sequences those loops according to an algorithm. Fixed recordings afford much more attention to detail than algorithmically structured music; so it now becomes a trade-off between duration and variation / predictability which offers more surprises and has the potential for infinite playback with new discoveries being made on every listen.

‘Infinite London’ is an ambitious and visceral Electronic track that whips and crunches through exuberant passageways with mischievously dark undercurrents; changing pace and overlapping with warmth and textures it’s an interesting insight the fuller experience that is ‘Infinite Music Machine’. With influences lying in Mouse on Mars, Cinematic Orchestra, Tricky and Amon Tobin; ‘Infinite Music Machine’ also hints at moments of Black Dice, Autechre, Clark, Four Tet and Battles.

As well as a highly accomplished and innovative musician he is a promoter and very much part of the London experimental electronica circuit and runs SQUARES, which has featured; Max Tundra, Digitonal, Chik Budo, OMMM and Graham Dunning amongst others.