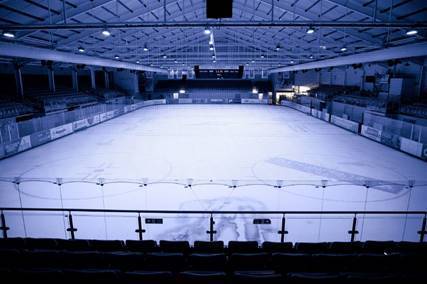 A huge opening weekend on 5th & 6th April curated by forward-thinking promoters, Our Next Event, sees superstars from the drum ‘n’ bass, house and tech worlds all playing including, Andy C, CamelPhat, Andrea Oliva, Dimension and many more. A crowd of 3,000 people and next level production combined make this a spectacular new addition to the UK’s dance music landscape.

The giant ice rink by day at MK Arena, is set to be transformed into a huge 16,000 square foot dancefloor with top level production when, for the first time, it opens its doors to electronic music, with an explosive programme of clubbing events. It all kicks off on Friday 5th April with BassJam presents Andy C where the superstar drum ’n’ bass DJ will headline, fresh off the back of selling out Wembley Arena in an hour, and a 13-week headline residency at XOYO, and will be joined for a massive night by the likes of Dimension, Darkzy, Problem Central, James Hype and FooR. Saturday 6th April stages crossover house sensations and Grammy-nominated duo CamelPhat presents BLOW! with Andrea Oliva, Detlef, Eli Brown, Max Chapman and more. This huge weekend of quality line ups is a statement of intent; MK Arena is set to be a must-visit destination for clubbers across the country. Tickets are available for BassJam presents Andy C from £25+b/f from www.skiddle.com/e/13434400 or for CamelPhat presents BLOW! from £25+b/f  www.skiddle.com/e/13464295. VIP tickets are also available for both events.

This music programme marks an exciting new partnership between MK Arena and leading events company, Our Next Event known as ONE. The well-respected Sussex-based company is best known for staging sold out parties around the South East of England with brands like PierJam, Cafe Mambo, Garage Nation and many more. Our Next Event joins forces with MK Arena to put the venue on the map as a thrilling space with dynamite shows set to draw crowds from all around thanks to its accessible location; approximately half an hour from London, Birmingham, Oxford, Bedford, Northampton and more.

The launch event on Friday 5th April sees Our Next Event bringing Manchester’s BassJam party and the world-renowned, king of drum ’n’ bass, Andy C, to Milton Keynes. He remains at the top of his career after more than 20 years in the game, as boss of Ram Records and with his legendary residency at London’s XOYO. He is joined by fellow drum ’n’ bass and garage greats, Dimension, Darkzy, Problem Central, James Hype and FooR.

Our Next Events director Oliver Ibrahim said, “We are aiming to develop MK Arena into one of the UK’s best electronic music event spaces. The ice will be covered to create a 16,000 square foot dancefloor and the arena will be transformed with industry-topping production. The rear stand will be converted into a VIP viewing platform giving guests an elevated and amazing view of the arena. The side stands will be draped to transform the space and improve acoustics. This is just the beginning of what is set to be an exciting event calendar for Milton Keynes.”

This is thrilling news for fans of large-scale shows as few dance experiences will be more explosive and adventurous than those by Our Next Event at MK Arena. For further event info, line up announcements and ticket details, visit www.facebook.com/miltonkeynesarena.