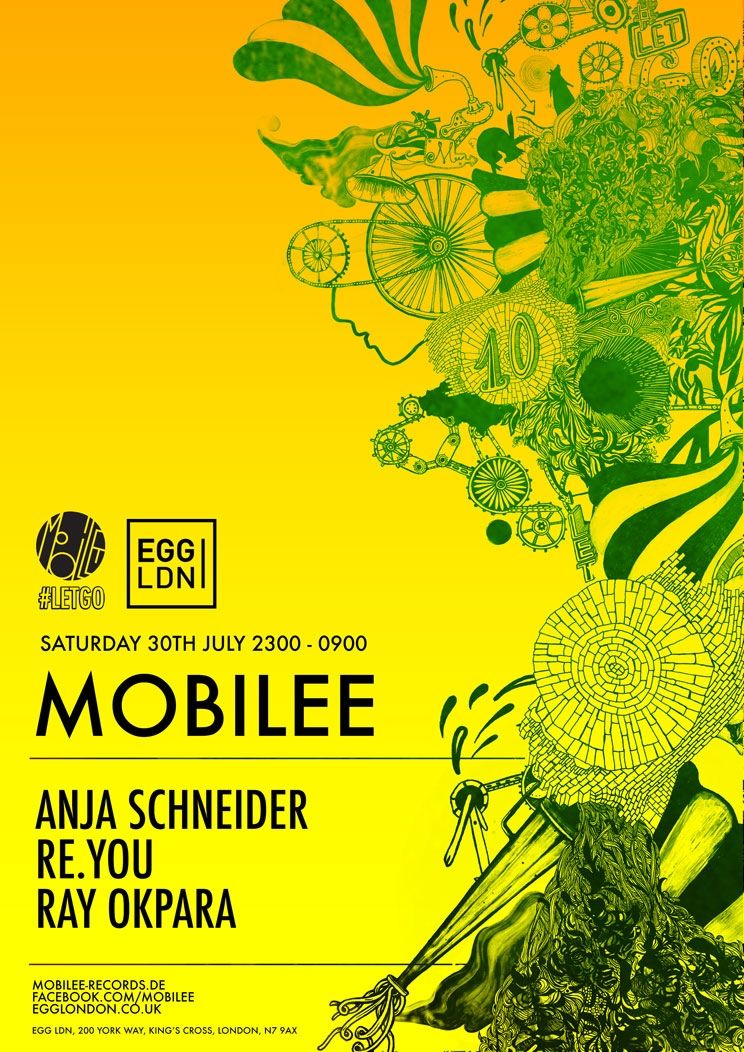 u and Ray Okpara.

From label showcases at Watergate to legendary rooftop events at Hotel Diagonal in Barcelona. Special things happen when Mobilee’s extended family come together. Hugely esteemed and one of Egg LDN’s favourite super groovy labels, Mobilee’s inspirational leader Anja Schneider juggles the responsibilities of touring every weekend, with running a label and agency plus a weekly radio show, alongside that of being a mother but when the stars align, the results are memorable and tonight the constellations gather at Egg LDN. Arguably in the most inspired creative patch of her career, Anja’s ‘Soul Traveler’ EP out in January was rated by XLR8R as ‘one of her best for several years’, to her deft remix of Catz ‘N Dogz ‘Joy’ that was rinsed by B.Traits on Radio 1, to the stunning dreamy bliss of ‘Caracus’ (her contribution to the recent Moon Harbour compilation) , and the forthcoming Mobilee release, ‘Rain EP’  all illustrate her creative versatility blending energetic yet emotional house n’ tech music to soundtrack the summer like no other.

From the get-go with his first single ‘Work’ with Rampa, to ‘Ghost’ which was featured on Sven Väth’s infamous Sound Of the Season compilation to his huge edit of Lana Del Rey’s ‘Video Games’, Re:You’s commanding presence on the dancefloor is in huge demand.  Currently featured on Rude Hagelstein’s ‘Ten Years Of Souvenir’ compilation – he’s been part of the family since 2011 – and his current ‘Purple Claim’ hypnotiser, Re:You continues to go from strength to strength having already racked up classic tracks like ‘I Don’t Know Baby’, ‘Fever’ and ‘Very Very’ .

Rounding off this hotly anticipated Mobilee showcase is Ray Okpara, channeling his percussive, dirty hypnotic soulful deep house grooves.  Behind the big smile and wiley dreads he is one of house music's most serious Producer/DJs who’s been instrumental in Germany's flourishing house scene for well over a decade. A Berlin resident since 2005, he first broke out in 2008 via releases on Cecille, Oslo, Get Physical and Area Remote going on to launch his own label  Ama Recordings, championing new artists such as Brodase, Hot City Orchestra and Marko Nastic in 2010. Welcomed into the Mobilee family in 2012, Ray has clocked up numerous

successful releases with most notably, the "Back to Back Volume 8" compilation, "Sugar Feel EP” and the ”Rao de Rani EP”, and continues to deliver unique well-crafted dancefloor killers like ‘Angel Eyes’ and lead the charge behind the decks of some of the world’s finest electronic music clubs and festivals.