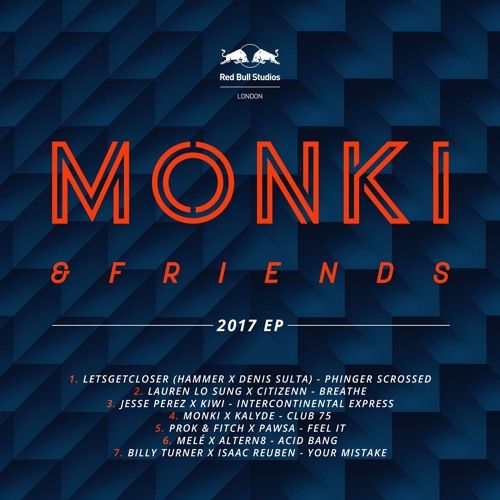 Having evolved to a sound stepped in house and techno, Monki continues to be an underground tastemaker known for championing electronic talent, having recently hosted the likes of Skream, Carl Cox, and Solardo on her BBC Radio 1 show. The British DJ and founder of digital imprint, Zoo Music, returns with her fifth ‘Monki & Friends’ EP featuring tracks from the likes of Denis Sulta, Melé, Hammer, Lauren Lo Sung and more.

Billy Turner & Isaac Reuben’s ‘Your Mistake’ takes on initial dark and brooding tones, before the menacing tech build-up gives way to a strong bassline. The production that precedes it demonstrates the diversity of the Monki & Friends EP, Kalyde & Monki’s ‘Club 75’. Having enjoyed a long career as a DJ and radio host, ‘Club 75’ represents Monki’s first official production and delivers with a bouncing bassline and real house and disco flavour.

Lauren Lo Sung and Citizenn team up to create ‘Breathe’, a chilled production laced with building rumbles as the track progresses, before Prok & Fitch + Pawsa deliver a thumping floorfiller with ‘Feel It.’ With deep dark juddering mechanical sounds adding a real underground vibe to the breakdown, menacing horns are interjected by the vocal sample of Mr. Fingers’ classic Chicago house anthem of the same name.

Denis Sulta & Hammer’s ‘Phinger Scrossed’ contributes depth and diversity to the EP. Created over the course of three days in the Red Bull Studios Berlin, this stand out collaboration from two of house and techno’s rising stars is a statement of intent from the in-demand duo. An explosive production that utilises one of Sulta’s trademark intense and progressive builds, ‘Phinger Scrossed’ then launches into old school hardcore breaks and heavy basslines.

Fresh off the back of her highly successful ‘The Warning’ UK tour, in which Monki played several locations, including Fabric London, and Junk Southampton, this EP comes in the midst of a busy summer for the DJ in which she has played stand out shows at Glastonbury, Parklife, Hideout and more.