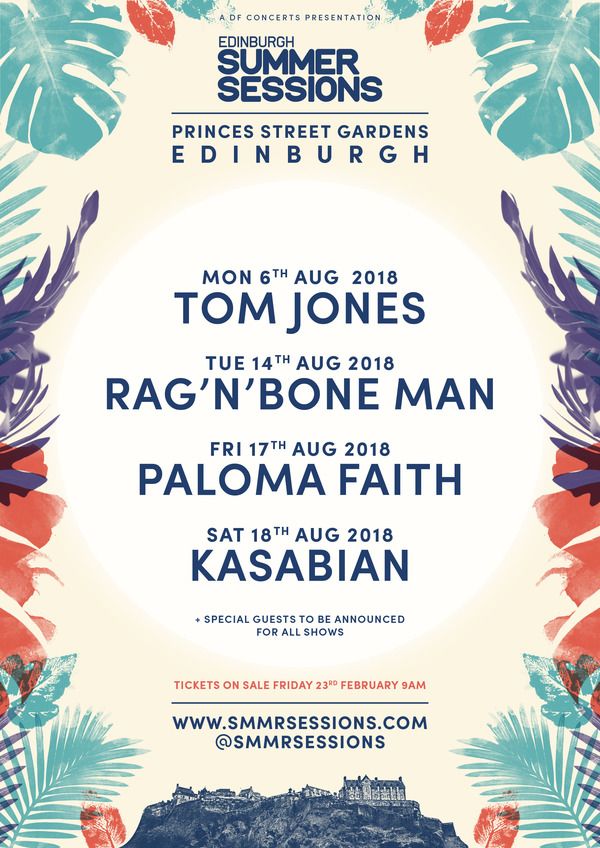 The first headliners announced for Edinburgh’s brand new festival, Edinburgh Summer Sessions – are Tom Jones, Rag’n’Bone Man, Paloma Faith and Kasabian with even MORE to be announced soon. Taking place during Edinburgh’s world famous Festival Fringe, this exciting new era in Edinburgh’s music scene will bring these world-class acts to Princes Street Gardens, for a series of truly magical shows, in one of the most beautiful live music locations in the world.

These four outstanding artists are the first to be announced for the new festivalEdinburgh Summer Sessions, a bespoke version of its sister event Glasgow Summer Sessions. The shows will take place at the Ross Bandstand, in front of the breath-taking backdrop of Edinburgh Castle – providing a brand new music strand to the Edinburgh Fringe.

Welsh superstar Tom Jones joins the Edinburgh Summer Sessions line-up, taking to the Ross Bandstand on Monday 6th August 2018, with a set filled with hits from his 50 years in the music industry including ‘Sex Bomb’, ‘Delilah’, ‘It’s Not Unusual’, ‘What’s New Pussycat’ and countless others. The singer has perhaps one of the most famous, and recognisable voices in the music world, and charisma to boot.  His unique sound ranges from pop to rock, R&B to soul and dance to gospel, proving that Tom Jones really can conquer any musical style he wants to. The Grammy Award winning singer played Edinburgh Castle’s Esplanade almost 4 years ago and in 2018, will now once again be part of the capital’s iconic history by making his debut at Edinburgh Summer Sessions.

The prodigiously talented Rory Graham a.k.a Rag’n’Bone Man takes to the Ross Bandstand on Tuesday 14th August 2018, another hugely exciting artist to join Edinburgh Summer Session’s line-up for its opening year in 2018. Mixing contemporary hip-hop with blues and rock’n’roll, Rag’n’Bone Man’s raw talent shines through in his immensely powerful voice and the ability to expertly command an audience and take them on a journey of loss and redemption. Rory’s bass-baritone vocals caught everybody’s attention with the release of hit single ‘Human’, and debut album of the same name which became the fastest selling debut album by a male artist in the 2010s, hitting Number 1 in the charts. Rag’n’Bone Man will stun Edinburgh audiences with tracks like ‘Skin’ and ‘Grace’, and combined with the beautiful settings of Princes Street Gardens, it is a show not to be missed.

London-born powerhouse songstress Paloma Faith plays Edinburgh’s Summer Sessions on Friday 17th August 2018, after scoring her first number one album with 2017’s The Architect and a nomination for Best Female at the Brit Awards this month.Paloma Faith’s debut album went double platinum in the UK, and set the precedent for her mesmerising career. With heartbreak tunes like ‘Only Love Can Hurt Like This’, ‘Crybaby’ and ‘Picking Up The Pieces’, Paloma’s songwriting skills are second to none and have proved her to be a real shining light in the UK’s music scene. Her eccentric retro style has garnered fans across the world, as well as the singer’s masterful blend of genres like pop, R&B, soul and jazz.

Heralded as one of the biggest rock bands of their generation, Kasabian will make their debut at Edinburgh Summer Sessions on Saturday 18th August 2018,  bringing with them a colossal career spanning over 20 years and culminating in 6 albums, 5 of which reached Number 1 in the UK.  The Leicester four-piece’s latest album For Crying Out Loudsolidified their penchant for combining dance beats with rock anthems, and captivating audiences around the world with their spellbinding live shows. With hits including ‘You’re In Love With A Psycho’, ‘L.S.F’, ‘Eez-eh’and ‘Fire’ plus the band recently winning NME’s Best Live Artist, there is no doubt that Kasabian will host a magnificent party at Edinburgh Summer Sessions.

Edinburgh Summer Sessions’ artists will be part of festival history as they contribute to the city’s exciting new era of music in Princes Street Gardens. With Tom Jones, Rag’n’Bone Man, Paloma Faith and Kasabian already confirmed as headliners at the gigs, fans have even more to look forward to, and should stay tuned to smmrsessions.com / @smmrsessions on Facebook, Twitter and Instagram for more announcements coming soon.

These exciting live music events will take place in one of the most beautiful live music locations in the world – combining a Scottish audience with some of the highest profile artists on the scene today.  With Edinburgh’s bustling arts festival and electric city-wide atmosphere in full swing in August, it’s only right that the biggest names in music are brought to Edinburgh’s unique stage this summer at Edinburgh Summer Sessions.

Geoff Ellis, CEO of DF Concerts said: “We’re delighted to return to Princes Street Gardens and  announce our first artists for the inaugural series of Edinburgh Summer Sessions shows. With the success of its sister event Glasgow Summer Sessions, we’re thrilled to be part of Edinburgh’s electrifying atmosphere and culturally rich arts festival with these gigs. To have a legend like Tom Jones plus mainstays of the industry like Kasabian and Paloma Faith and the undeniably talented Rag’n’Bone Man proves our commitment to making Edinburgh Summer Sessions one of the real highlights of the summer.”