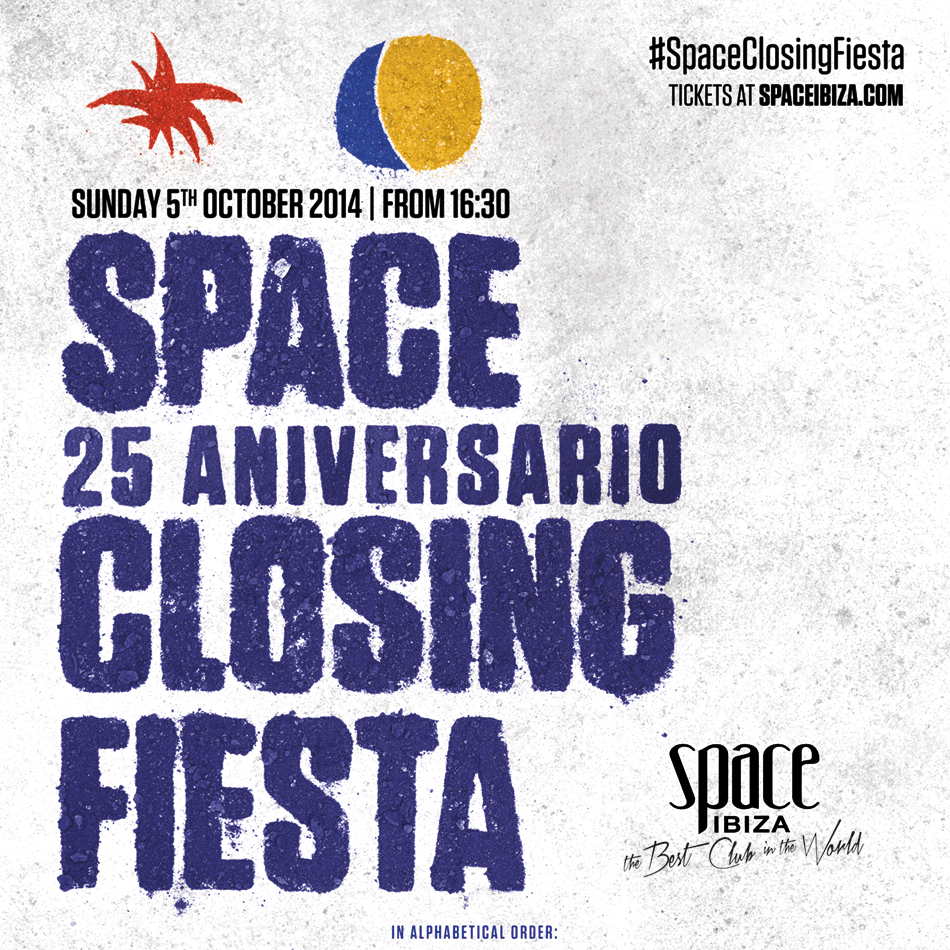 Space Ibiza Closing Fiesta is taking shape, with over 30 artists confirmed already, marking the end of another summer season in Ibiza.

For next 5th of October 2014, Space Ibiza has been developing a lineup where musical quality is a constant, trying to give a sweet taste to the classic and bitter goodbye. The music icons of playa d’en Bossa Club parties, the national artists highlights, renowned artists, the residents of the club and of course, the ever present local talent in the major events of Space, are the chosen ones to become part of this Closing Fiesta on the twenty-fifth season of Space Ibiza.

French DJ Agoria shows up for the third time in Space Ibiza main events, Opening, 25th Anniversary and now our Closing Fiesta. One of the most beloved artists in the island, Carl Cox, won’t miss this event either. Deep Dish, the classic duo formed by Dubfire and Sharam, will also land in the island in exclusive for Space Ibiza. The most up to date English brothers, Disclosure (DJ Set) will attend the Closing celebration for the first time after the great success achieved throughout the summer in several We LoveŠ events. DJ Tennis, Life&Death Project cornerstone, and Nic Fanciulli who’s said to be one of the best Tech artists on nowadays electronic scene. Josh Wink, such an eminence in electronic music, and the trio Visionquest (Ryan Crosson, Lee Curtiss and Shaun Reeves). Camilo Franco, Javi Bora and Jonathan Ulysses, residents of Ibiza Calling, Kehakuma and Café Olé will also perform on this date. John Talabot, the Spanish artist with the biggest nowadays international visibility and his production mate Pional who’s the backbone of the label Hivern Discs. Chus+Ceballos who are essentials in Ibiza scene and most of the international music events. Julian Jeweil, who will perform a live set where the track “Air Conditionnee” will sure be played by the French DJ. The voice of Ibiza Global Radio, David Moreno, is back to Space after his formidable set in the Opening Fiesta. Paul Reynolds, Ian Blevins, Ramon Castells, Igor Marijuan, Elio Riso or Mr. Doris, regular artists in this Space Ibiza 2014 season will also join the ranks of the best club in the world closing celebration.

Six areas will be open, including the favorite one by the clubbers, the outdoor zone located in the rear of the club, Ultra Ibiza Arena. This charismatic outdoor area that only opens during the Openings and Closings; and exceptionally during the last anniversary, will be the first to open at 4:30 in the afternoon. The Funktion One sound system, a spectacular stage production and the lineup previously mentioned will be, with more confirmations to be announced next 3rd October, the finishing touch of one of the best seasons in the best club of the world, Space Ibiza

Buy your tickets for the Space Closing Fiesta because it is not the end, it’s the beginning of another chapter in the history of the best club in the world.