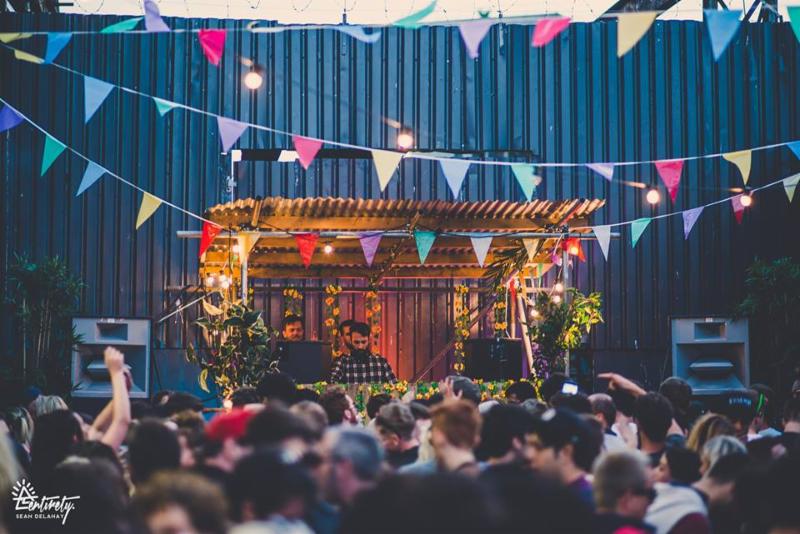 After a momentous first half of the year which has seen Motion named the 19th best club in the world, and seen heavyweights like Loco Dice, Enzo Siragusa, Steve Lawler, Roni Size, and even Idris Elba, plus many more graced the warehouse. Motion are now proud to announce a few more dates to the Summer diary.

The Summer programme begins with the opening of Lock Yard on 26th May. Lock yard is the new canal-side event space located at Motion, an old disused lock is now home to "stone baked" pizza by the slice and a licensed bar serving ice cold beers, cocktails & more. Boogie Nights will be hosting the first of Lock Yard's free evening parties, which will run every Friday from 5pm-10pm throughout the Summer,  with hand-picked DJs spinning everything from hip-hop to disco.

Love Saves The Day is now the calling card of Summer in Bristol and as day turns to night on Love Saves The Day 2017 Motion will be swinging open its doors for two very special after parties. Opening up on the Saturday (27th) will be a heavyweight line up of Jamie Jones, Detlef, Saoirse, Waifs & Strays, Waze & Odyssey, Mella Dee plus a host of other names across 4 stages. Sunday (28th) will see a more bass orientated affair with My Nu Leng, AJ Tracey, Redlight, Zinc, Dimension, Randell and TNA bringing the curtain down on Love Saves The Day 2017.

Summer will be in full swing by the 3rd June when the Just Jack All Day Partaaay arrives with a dream line up that is sure to bring all the vibes to Motion's outdoor spaces, with Motor City Drum Ensemble, Shanti Celeste, Beautiful Swimmers, Objekt, DJ Stingray and DJ Nobu. Whilst inside, the party will be continuing with Shapes & Boogie as they host Scuba, Nastia, Deetron, Andy Butler (Hercules & Love Affair), Mr Mendel plus many more acts across three stages.

As we travel further into the summer months and into June, Motion continues to deliver stellar line ups after stellar line-ups.  The first weekend in June does not disappoint. On June 4th, the legendary Craig Richards alongside the masterful Nicolas Lutz will be soaking up the rays on the terrace for an extra special SF Terrace Party.

The Hospitality Bristol BBQ XL returns again on 10th June, taking over Motion's outside areas with a fine selection of foodie treats alongside a line up that would make any drum and bass fan salivate. They welcome the London Elektricity Big Band for a very special live show alongside DnB pioneer Roni Size, Fred V & Grafix, Nu:Logic and S.P.Y.

After the almighty success of last year's debut, the Summer Solstice Yard Party is returning and promises to be even bigger. Taking over the outside space on 17th June, the fresh take on a day party is an all out celebration of the sun with the very best in local disco and house talent, carrying us through the day and into the night.

Simple Things are proud to bring groundbreaking Australian duo The Avalanches to Bristol on 20th June. Still riding high from their highly acclaimed return last year after 16 years away, it promises to be a show not to be missed.

1st July sees Defected holding an all day affair partying through the day and long into the night with a line-up channeling the best of the White Isle – Roger Sanchez, Amine Edge & Dance, Sam Devine, Josh Butler plus a massive special guest yet to be announced.

Eats Everything will be bringing his Edible label to Motion for an Edible BBQ on the 15th July. He will have Waze & Odyssey, Melé, Elliot Adamson and Lord Leopard flipping burgers and bangers alongside him. Expect burly house music with equally burly burgers from one of Bristol's favourite sons.

Motion are delighted to welcome back Shall Not Fade, The Bristol based label return with a monster line-up on 22nd July. The label continues to go from strength to strength and so do its parties, they welcome lo-fi dons Mall Grab, DJ Boring, TRP and Frits Wentink to the Craneyard, alongside Northern favourites Contours and LK.

August will see Bristol's premier gay party return as Bitch, Please! bring, the enigmatic The Black Madonna to the Crane Yard on 5th August. The Mixmag DJ of the year 2016 is joined by Marquis Hawkes,Mr Price, Em Williams who complete the bill alongside Bitch, Please! residents ZenZero and Amour Ami.

The 26th August sees Motion embark on their most ambitious outdoor project to date. The opening of The Yard – Bristol's first open air club. The space is a collaboration between some of the cities most established dance music institutions. The opening will host a gargantuan line up of bonafide house and techno dons with the likes of Seth Troxler, Jeff Mills (live), Eats Everything, Joy Orbison, Daniel Avery, Midland, Axel Boman, Octo Octa and Tobias welcoming in a new era of outdoor clubbing in Bristol.