Lisbon-based musician Moullinex, artist Bráulio Amado and director Bruno Ferreira set out to make a film within the restrictions we’re living in as a framework for self expression.  Using only binoculars and an iPhone, the film was entirely shot from inside a car and captures performances from people living in social isolation, inside their windows, balconies or roofs. The soundtrack ‘Luz’, which is Portuguese for ‘light’, was then scored to this film by Moullinex in his home studio, with vocals added by GPU Panic and is released today on Discotexas. The film was shot in Lisbon during the first week of April, and after several media outlets describing the country’s fast response to the pandemic as the Portuguese Miracle, it now stands a message of resilience and hope.Moullinex had been working on finishing his fourth studio album, but suddenly the quarantine hit and he started compulsively making music. ‘Luz’ is the result from these sessions, released as a response to the fast changes we’re living in and comes as an early insight into the forthcoming album which looks to land later this year. 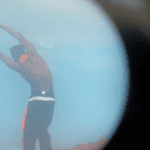