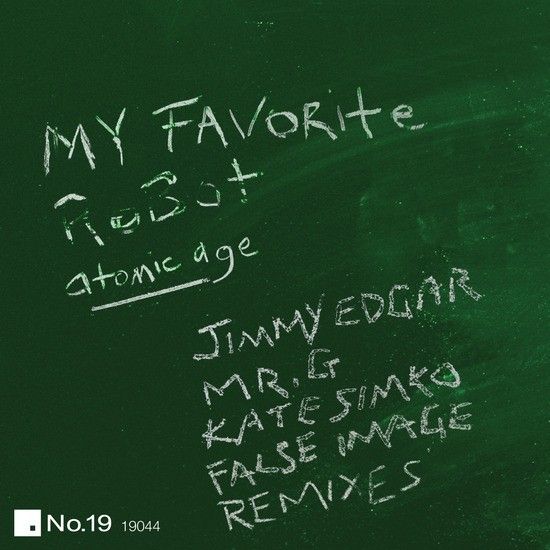 After the success of Atomic Age, No.19 Music released recently from Canadian musical talents My Favorite Robot, the label has decided to enlist four acclaimed producers to provide remixes of key tracks. Detroit bad boy Jimmy Edgar, Chicago’s Kate Simko, legendary techno producer Mr G and False Image all appear on this great EP. To top off the brand new remix package, the trio will kick off 2014 with a string of North American dates beginning with the debut of their live band, featuring vocals, guitar and keyboard, at Voodoo in Los Angeles on New Year’s Eve.

The momentum builds to their Crossing Wires Beach Party at The BPM Festival in Playa del Carmen on January 3, where they will showcase their performance alongside Timo Maas, Page Fairmont (Live), Jonny Cruz and Stefan Z.

The one and only Jimmy Edgar – who has recently launched his own label Ultramajic – goes first with his terrifically alluring version of “White Light.” He expertly re-works the track into a robotic bit of house that’s filled with pinging synths lines, rasping metal chords and shiny percussion. It’s typically libidinous and full-blooded and is sure to make for some really standout moments on the floor.

No-nonsense Rekids man, Mr G, then re-imagines “Here Tonight” as a heavyweight, firmly rooted techno groove with manic conga playing and drilling bass fleshing out the groove. It’s a driving track for the dead of night and displays all the man’s usual full-throttle intent.

Kate Simko, a revered DJ, live act and producer with labels like Leftroom, remixes the superbly titled “Centerofattentionaaut” with the help of some live musicians including violinists. In her hands the track is a slightly spooky, sparse affair that snakes it way through a desolate urban landscape with subtly rising, hugely musical melodies and plenty of unsettling ambiance contained within. When the vocal arrives at the mid-point, it marks a timely release of tension that will undoubtedly send hands skywards.

Digital bonus track “Home” is remixed by Get Physical’s leading tech house stars, False Image aka Noah Pred and Tom Clark. They strip things back to a gritty bump and grind groove that’s couched in a warm bed of dub and wallows in some fine synth work come the mid-point.

Given the quality of the source material, it’s no wonder these remixes are so refreshing, but kudos to No.19 Music for bringing in just the right names to ensure such an amazing result. The ‘Atomic Age Remixes’ EP is out now on No.19 Music and available for purchase on Beatport.