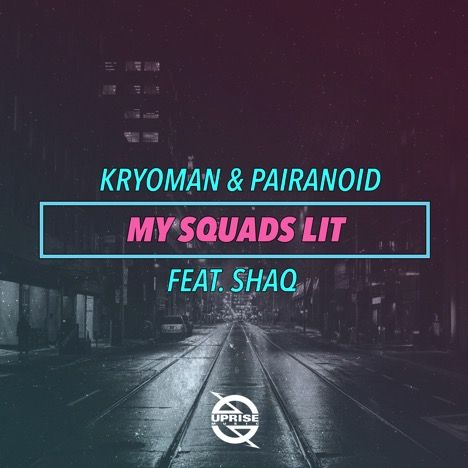 Now here’s an unexpected team-up; three heavy hitters have combined to bring dance music fans something they’ve never heard before. The names Kryoman and Pairanoid might ring a bell; the former has made a name for himself with over-the-top robotics and music that have earned him a regular spot at Hakkasan in Las Vegas, while the latter nabbed the anthem to 2014’s Winter Music Conference as well as their last release “Carry On” out now on Uprise Music. Kryoman and Pairanoid’s first collaboration, “Pomme de Terre” was also a massive success to close out 2015, racking up almost 300k plays on Soundcloud.

But it’s the featured artist who’s one of the most recognizable names in pop culture – former NBA player Shaquille O’Neal. Shaq is no stranger to the EDM world; last year he made his debut as DJ Diesel at TomorrowWorld. This time he’s back to help out on his first original production, providing vocals for “My Squads Lit.” This bass-house tune makes the grade, especially due to Shaq’s simple, yet catchy lyrics. Kyroman & Pairnoid crafted the perfect tune that’s sure to get you and your squad ready to own any room you walk in to as you gear up for the upcoming festival season.