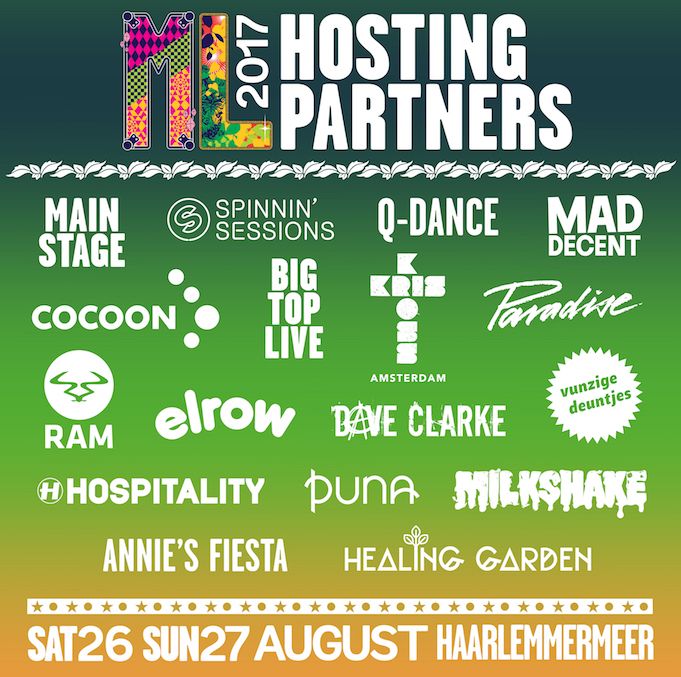 Mysteryland will celebrate its 24th edition in 2017! Taking place on August 26th and 27th, the mother of electronic music festivals will once again take place on the former Floriade terrain, just a stone’s throw from the city of Amsterdam. Over 100.000 visitors are invited to embark on a musical journey and discover 250 DJ’s and live acts on breathtaking stages. The hosting partners for this magical weekender are revealed today. Not only is Mysteryland joining forces with some of today’s leading international labels and platforms in the world of electronic music, it is also embracing a broader variety of musical styles than ever before.

Mysteryland 2017 promises to be another blazing explosion of cutting-edge electronic music. All throughout the weekend, the Main Stage will form the centrepiece of this musical tour de force, hosting only the best in big room sounds from all across the board. And of course, Q-dance is present again, dazzling the senses with their relentless hardstyle, stunning stage designs and finales.

More bombastic sounds from top notch artists can be heard throughout the weekend. On Saturday, the world’s no. 1 house label will return with its legendary Spinnin’ Sessions in the renowned Big Top tent, staging the most prominent artists in contemporary dance music. And on Sunday, Mysteryland will see the premiere of its first ever electronic live stage, The Big Top Live, where some of today’s hottest electronic live bands will take to the stage.

This August, all techno, tech-house and deep-house fans are in for a treat! After many years, Sven Väth’s legendary German techno institute Cocoon is returning to Mysteryland, bringing along some of today’s leading techno artists. And those seeking the more industrial techno sounds will find ‘The Baron of Techno’ Dave Clarke presenting another techno stage, where an A-list of the Englishman’s befriended techno producers will tend to the decks. Jamie Jones’ acclaimed Paradise is also making a debut at Mysteryland this year. Staging a star-studded line-up of tastemakers in the realms of tech house and deep house. Last but not least, Barcelona’s (in)famous Elrow is returning for another debaucherous weekend of tech house stompers, confetti avalanches and mesmerising show elements. You’d better buckle up for this one.

Here’s another stage that can’t be missed at Mysteryland 2017: on one of the green islands of the Northern festival grounds, Kris Kross Amsterdam are partnering up with Crazy Town, bringing you their unique blend of captivating eclectic sounds. And on Sunday, Diplo’s imprint Mad Decent will showcase the dancefloor craziness they have become famous for.

With Mysteryland broadening its musical scope this year, you can enjoy an ever wider variety of styles. At Vunzige Deuntjes, you can grind to the sleaziest hip hop, R'n'B and dancehall evergreens. Holland’s top hip hop blog Puna is staging the best rappers of the Low Lands. And for the first time in the history of Mysteryland, drum ’n bass is making its roaring debut. Two of the genre’s most legendary labels are represented: Ram Records on Saturday, and Hospital Records on Sunday—it goes without saying: mayhem is guaranteed.

But it doesn’t end there. As always, the LGBTQ-minded Milkshake Festival is set to stir things up with a heap of hysterical acts and fabulous musicians. And Annie’s Fiësta is a full-blown mountain escape, where you can never be sure what outlandish music you’ll be exposed to next…

Finally, the Healing Garden is once more Mysteryland’s ceremonial space, where gurus and shamans welcome you to leave behind physical laws and embark on the profound journey to your inner self.

Join Mysteryland’s magical exploration through sound on the last weekend of August 2017. Early Bird tickets are sold out. Starting Wednesday, March 8th, you can sign up for the lineup pre-sale, bringing you not only the opportunity to win exclusive prizes, but most importantly: you’ll be the first to hear Mysteryland’s hottest artists on the 2017 lineup!

Register to the lineup pre-sale to buy your tickets in advance and be in the running for great prizes at www.ML.nl.