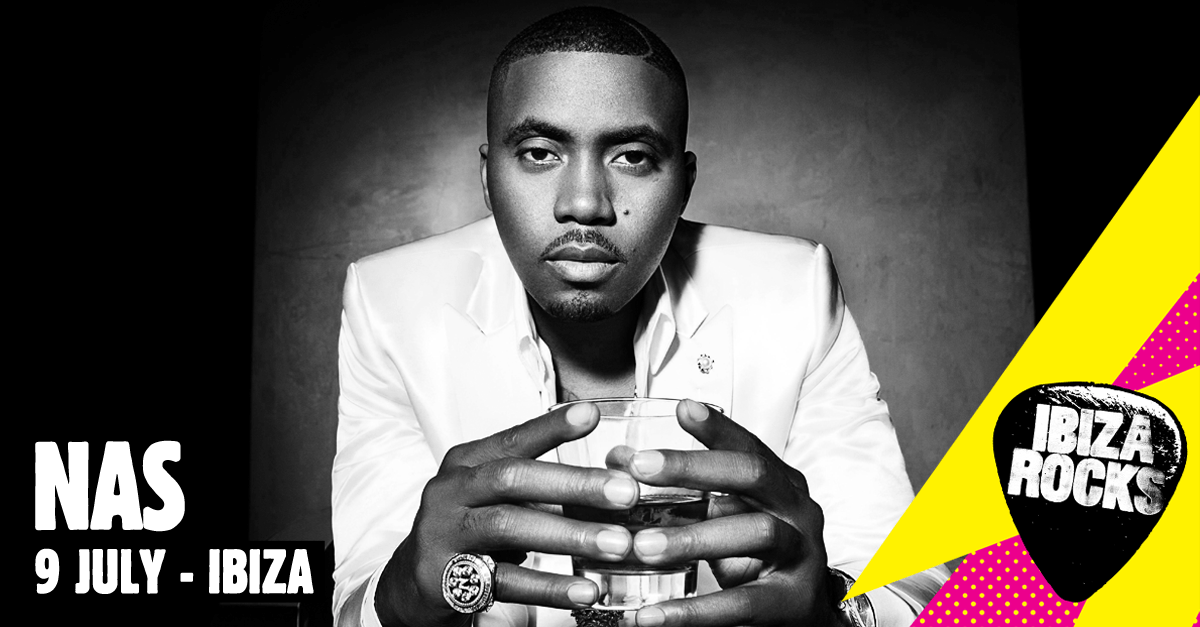 Bringing the sounds of NYC live and direct to the Balearics this summer, genuine hip-hop legend Nas will make his Ibiza debut for a storming outdoor set live under the stars on the famous poolside stage at Ibiza Rocks on 9th July 2014.

Following his triumphant return to the stage at Coachella 2014 with guest appearances from fellow hip-hop icons Jay-Z and P Diddy, the Queens-raised rap superstar will head to the White Isle in July for an unmissable headline performance at Ibiza Rocks – a show that promises to be one of the highlights of the summer. Nas will perform his game-changing 1994 debut Illmatic in its entirety as part of the 20th anniversary celebrations of the seminal release.

Dubbed a poetic master by music fans and critics alike, this is a rare opportunity to see one of the world’s most respected hip-hop artists perform a musical masterpiece- that’s spawned a string of tribute albums – live and up close in a unique, intimate setting. Expect an unforgettable set jam-packed with rap classics including album highlights N.Y. State of Mind, The World Is Yours and Life’s a Bitch, to name just a few.

The headline show is part of the 20th anniversary celebrations of Illmatic taking place this year, which also sees the record released as a special collectors’ edition, titled Illmatic XX, teamed with the launch of a feature-length documentary film, Time Is Illmatic.

Born Nasir Bin Olu Dara Jones in 1973, Nas rose from humble beginnings in New York to become one of the most revered rap artists in the world. After getting his big break at the age of 17 with an appearance on Main Source’s 1991 track, Live at the Barbeque, Nas has since released eight consecutive platinum and multi-platinum albums, and sold a whopping 25 million records worldwide, scooping 13 Grammy nominations and top five rankings on MTV’s 10 Greatest MCs of All Time list along the way. The artist’s most recent release, 2011’s Life Is Good, stormed to the number one spot on the Billboard Top 200, marking the 6th number one album Nas has had in his glittering career.

Shane Murray, Promoter, said: “We’re absolutely thrilled that Nas, a genuine hip-hop superstar, has joined our Ibiza Rocks schedule this summer, which is without doubt our best line-up to date. Having influenced so many of the acts that have taken to the Rocks stage, it’s fitting that Nas is now performing at last in what will be a truly special night.”