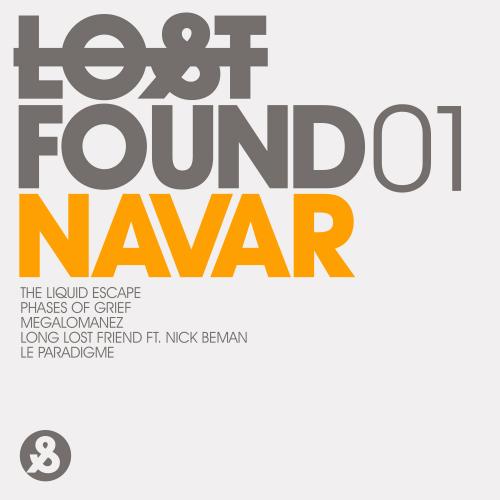 A few months ago, Lost & Found (LF008) gave the world a first glimpse of an exceptional young artist who is undoubtedly standing at the beginning of what promises to be a very exciting and long musical journey through life. Navar has the ability to create totally enthralling dance music and this mini-LP format is the perfect way for him to present himself to the world.

Label boss, Guy J, has found a like-minded soul in Navar – inspired by a broad range of different genres that is also reflected in his music – music that can be best described as deep, melodic, hypnotic and most definitely danceable.

Navar (or Eelko Wijnja to his family and friends) can be best described as a real studio junkie. Since he first delved into the mysteries of music production at the tender age of 13, this youngster from Friesland in the north of Holland has quietly been learning his future trade. His prodigious talents have been spotted early by Guy J, who has been quick to sign up this selection of stunning tracks that will no doubt put Navar firmly on everyone’s radar and who better to introduce the tracks than the young artist Navar himself…

The Liquid Escape
After moving to two different new homes last year, and not feeling happy with my job back then, I sat in my living room and let the energy out that deep inside me described, not how I felt, but the way I should be feeling. This track captures that exact feeling – I was a bit emotionally overwhelmed when I accidentally came across the weird sound effect during a session (in search of that sound). To express how you feel when you are selecting sounds is such an amazing tool that you have as a human being, because everything comes together – emotions, negativity, happiness, adrenaline, goose-bumps – and the fact that it turned out to be this kind of track, is for me, still a huge pleasure to listen to.

Phases Of Grief
This track was written after me and my ex-girlfriend decided not to move on together anymore, it feels very private for me, to describe/express why I wrote this song, knowing it is impossible for me to lie about my memories. But, this was the exact melody that I had in my head, whilst I was under the shower one day. The melody can be best described as representing: forward thinking, loss, strength, grief – energy that brings you towards an “after the rain comes sunshine” mood. So for me this is a very emotionally driven track that could be heard by someone else as a feeling he/she would like refer it to. That’s what people do.

Megalomanez
During his final years, and especially after the death of Hephaestion, Navar began to exhibit numerous signs of megalomania and paranoia. The military achievements of the Frisian army and the flattery of Navar’s friends may have combined to produce these delusional fantasies of power and relevance… I almost thought I could get away with that idea… But, in reality I made this track two days after ”Phases Of Grief”. I like the title of this track, but the meaning if you search on the web is less important. I felt such a drive in this one and thought it would be nice to name it as ”Megalomanez”.

Long Lost Friend (ft. Nick Beman)
I think this is the 6th version of this track because I was waiting for a long time to capture that right moment. All of a sudden when I was working on a session I came a cross these vocals that I’d had sitting around for a long time. Like so many times, it turned out to be the moment that the track fell into place, this was the moment I had been waiting for.

Le Paradigme
It’s the melody here that made me think about ”Paradigm” – a club in Northern Holland, in place called Groningen. I think it is one of the finest venues our country has to offer. This club means a lot to me, and my musical adventure, because you get influenced by the perfect blend between styles: Progressive, Techno, House and Minimal, and also the energy of people that are in and around this area. The melody expresses some very nice moments that I wanted to share, when Guy J played there, for example.