NCS today cemented their position as one of the world’s biggest independent electronic music labels, confirming ‘end-of-decade’ figures that include a whopping 235 billion YouTube streams.

With 24 million subscribers to their YouTube platform, NCS control the third largest YouTube channel in the UK, behind only One Direction and Ed Sheeran. However, their reach extends far beyond those subscribers, thanks to a revolutionary distribution model that has turned conventional industry thinking on its head.

Label founder Billy Woodford explained further: “NCS was the culmination of me and my content creator friends needing ‘safe’ music that enabled us to monetise our videos. In the early days of YouTube, I saw more and more content creators growing their audiences. Being an outsider to the music industry, my initial thought was “Why are people not allowing their music to be showcased to these huge audiences?” I then started NCS and it evolved into a record label with the sole purpose of providing safe music that creators can use.”

Artists across the NCS network have already begun sharing their individual streaming stats. Highlights from the label’s first decade include artists Elektronomia, Cartoon and Daniel Levi, who have accumulated 19.1billion, 17.1billion and 14billion views across all their videos respectively thanks to their releases being shared by 6.3million, 6.1million and 5million content creators. In particular Cartoon’s single ‘On & On’ has clocked an incredible 14billion views in over 5million separate videos, while Elektronomia ‘Sky High’ has amassed 6.8billion views in over 2million separate videos.

“The benefit of this model is that once an NCS track is released by the label, 24M+ creators have access to use the track to use in their videos where their fans can watch,” Lee added. “So for example, if someone is watching their favourite creator’s YouTube video that includes NCS music, they could hear the song in the background of the video and really enjoy it. They then might decide to click on the song link and buy or stream on stores. They may even turn into a fan of the artist and head over to their social media. With this model, we’re spreading music like wildfire. Once someone hears some music, they can’t unhear it, and if they love it, they’ll do anything to get their hands on it and know what it is.”

Having proven themselves a British indie label with major label reach, NCS sights are now set on expanding their business to more online platforms, including building their own music library platform to provide creators with a hub of safe to use music from the rapidly growing community of NCS artists. – Their site is due to soon launch here: http://ncs.io/launch 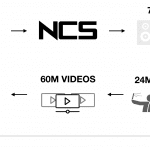