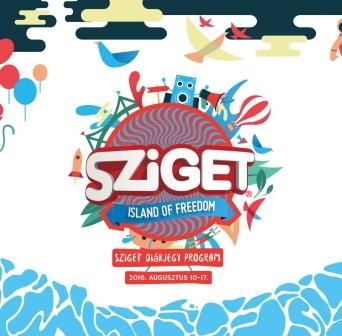 Sziget Festival is a non-stop music and arts festival with hundreds of program offered every day for its 7 days. This time some new names have been added to the line-up such as Afrojack, Die Antwoord, Skunk Anansie, Troyboi and many more. Sziget is held on a lovely green island in the middle of Budapest between 10-17 August. Advance round 1 tickets are available until 5th May.

Sziget aims to represent as many genres and art forms as possible. This is the place where contemporary circus and EDM are neighbors and where the to-do list of visitors is just endless. The list of program venues are expanding continuously as the programs themselves. You can find the map of program venues here: http://szigetfestival.com/info/map

New names
Grammy Award winning Dutch DJ and producer Afrojack, will definitely make a great party at Sziget, as well as the South African rap-rave group of Die Antwoord. The Canadian-born, LA based duo of DVBBS will definitely bring their high-energy presence behind (and on top of) the deck at Sziget. Szitizens can celebrate the anniversary of the birth of Punk; 40th anniversary with Marky Ramone's Blitzkrieg, while Skunk Anansie will return to Sziget with a great live show. Troyboi, one of South East London's most closely guarded secrets has recently emerged from the shadows and is set to take the music industry by storm, now coming to the Island of Freedom. Moreover ZEDD, Russian-German Grammy Award winning musician and DJ is also coming as well as Carnage.