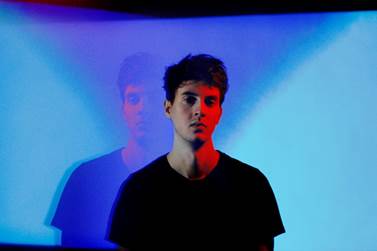 On August 19th Marius Lauber AKA Roosevelt releases his stunning, self-titled debut album via Greco-Roman / City Slang records. With the announcement of further festival appearances and his US headline shows in September, for which he’ll be playing with his usual 3-piece band, Roosevelt has also shared a rare piano performance of ‘Night Moves’ that he engineered, recorded and directed himself, filmed in one take.

‘Roosevelt’ the album is a pillow-soft hallucinatory dreamscape of nocturnal reveries and a lilting sense of melancholia, where sounds build and swell like waves.

Roosevelt’s signature hazy sound which ascends ever skywards is still present and correct – but this time it’s honed, crafted and less loop based. ‘Roosevelt’ showcases Lauber as a fully developed recording artist, with an instinctive synthesis of different soundscapes. This is a record with a deep affinity to the dance music world unified with sophisticated, classic song structures.

Roosevelt’s growth was catalyzed by an early DJ residency at Kompakt’s Total Confusion party alongside Superpitcher & Michael Mayer, with the label also releasing an early remix of his for COMA. These experiences helped Lauber realize how dance music connects to its audience in a different way to what he'd experienced from earlier days spent performing in bands. “What I really enjoyed about DJing was that you could see the results immediately – there was feedback and interaction from the crowd”, he explains.

Following this nightclubbing baptism, his career as an electronic artist gathered momentum. With praise from a selection of taskemaker media, mixes for Boiler Room, Electronic Beats and i-D, support tours with Hot Chip and Totally Enormous Extinct Dinosaurs and a litany of high-profile festival slots around the world, Lauber steadily built up a dedicated following.