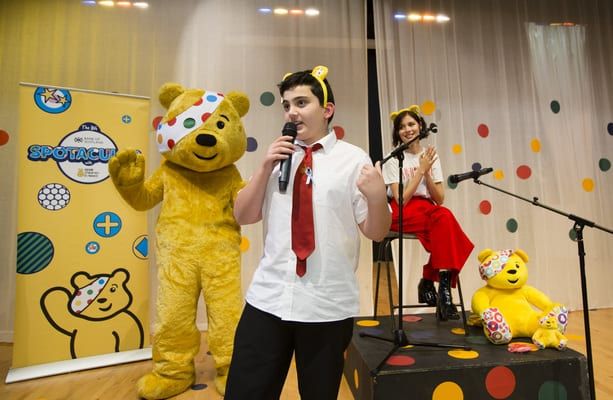 Nina Nesbitt today surprised pupils at Broughton High School in Edinburgh as part of The Big Spotacular, Bank of Scotland and BBC Children in Need’s2017 school fundraising campaign. Following the campaign’s success in 2016, which saw schools across the UK raise almost £6 million for the charity, the initiative has returned to encourage schools to raise money for disadvantaged children and young people.

Broughton High School is one of thousands of schools across the UK going spotty for BBC Children in Need in the weeks leading up to the charity’s Appeal Night, with children and teachers dressing in spots, selling spotty cakes and goods, and taking part in spotty themed challenges to raise money.

As part of today’s fundraising activity, Nina treated students to an acoustic performance before getting involved in the teachers vs pupils spotty fundraising challenges, as she helped kick off this year’s schools fundraising campaign.

Speaking at the school, Nina Nesbitt said: “It’s been an extremely fun day at Broughton High School going Spotacular with BBC Children in Need and Bank of Scotland to help raise money for disadvantaged children and young people across the UK. I’ve loved getting involved and I hope schools, teachers and pupils from around the UK are encouraged to get their hands on a fundraising pack, go Spotacular and get fundraising.”

John Wilson, Headteacher at Broughton High School, which is supporting The Big Spotacular this year said: “It has been wonderful to have Nina here with us today. The students always enjoy taking part in fundraising for BBC Children in Need and we hope to raise more money than ever during this 2017 appeal! We are very excited to put our spotty fundraising ideas into action for The Big Spotacular with BBC Children in Need and Bank of Scotland.”

BBC Children in Need and Bank of Scotland are encouraging schools to request their free The Big Spotacular Fundraising Kit, which is full of tips, tools and treats to inspire young fundraisers across all age ranges:

·         Nurseries and pre-schools across the UK are being encouraged to put on a Pudsey Picnic party – add spots to their bakes, dress-ups or picnics  in the run up to BBC Children in Need Appeal Week

·         Primary schools across the country are being encouraged to ‘Make it Spotty’, but  go spotty and sing, bake or get creative for BBC Children in Need

Those interested in finding out more about the Big Spotacular, requesting a free fundraising kit and downloading a host of free resources can visit: www.bbcchildreninneed.co.uk/schools