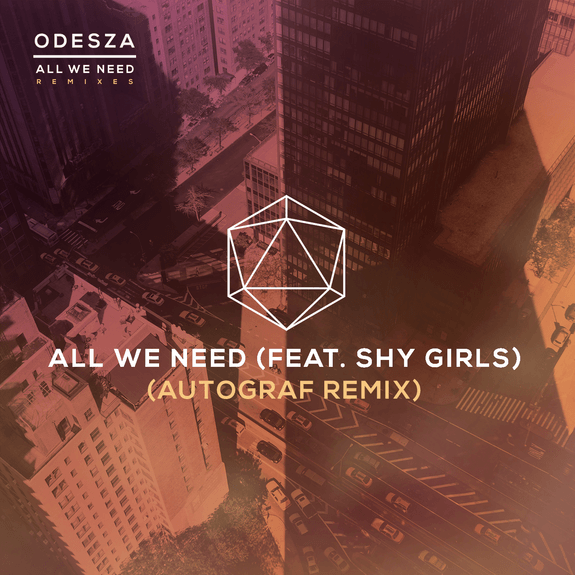 Continuing their ‘Future Summer’ evolution, Autograf is back with their take on “All We Need”, a track off the ever-popular Odesza album In Return, available via Ninja Tune Records and available to download on February 16.

Released as part of an eight track SoundCloud remix EP package, the Chicago natives are adding another ear tingling product to their already impressive portfolio, which includes remixes of Pharrell, Christina Perri, and Lorde.

Giving rise to a variation of their typical formula by stripping the track from its original vocals and percussions, the trio adds rhythmically synced cuts and breaks and blend together Shy Girl’s vocals with the syncopated synths to produce an effervescent texture throughout. To top it off, the track is infused with their signature marimba sound to complete this buoyant and colorful groove.

Having been listed on Dancing Astronaut’s “top 25 artists to watch in 2015”, Autograf has been living up to the hype as they continue to make waves throughout the electronic music sphere with their genre-bending creations. This release comes midway through the group’s biggest tour to date, with multiple dates scheduled in the U.S., Mexico and Canada, including sold out gigs in Chicago and Washington DC. To give their fans a taste of the live ‘Autograf’ experience, which features a live marimba and hand built midi instruments, Louis, Jake and Mikul have released a special recap video shot on location from their sold out gig in The Windy City AKA their hometown Chicago.

With a slew of dates and original content due to be released in Spring 2015, Autograf is on course to have their biggest year to date, so be sure to #LeaveYourAutograf and follow them on their socials!